In hindsight, I think I was probably crazy to think that having Alex’s third birthday party at home was a good idea!  I did a very half-hearted search of local halls contemplating hiring one, but never really got round to it.  And then suddenly I found myself with 17 children aged from 0-11 years old (and their parents) descending on us on a damp and chilly Sunday lunchtime!  Yikes!

Thankfully, it actually turned out brilliantly. Phew.  The rain held off and so we were able to use the garden giving us plenty of playing space!  We’d hired some garden toys from the brilliant Tippee Toes which Alex found so exciting when he spotted it – I might have to buy a slide for the garden now! 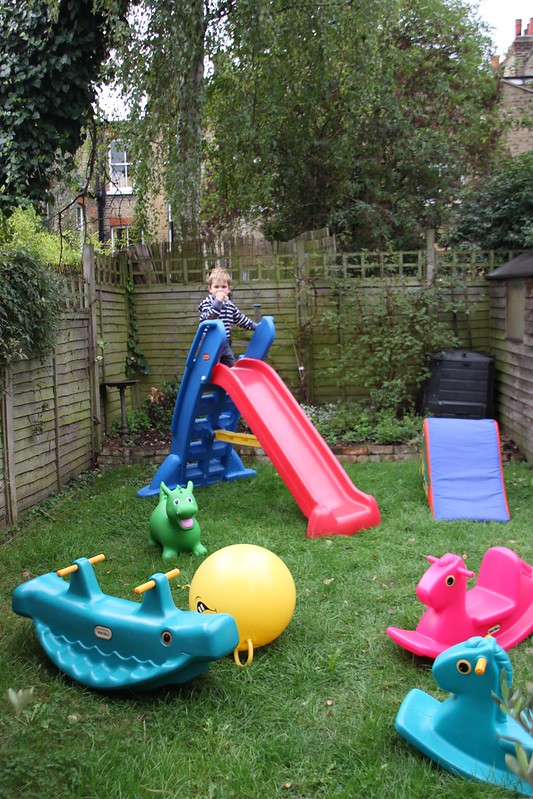 Here are Alex and Sophie testing out the rockers before our guests arrived:

We managed to squeeze everyone into the house, and the children had a brilliant time running around playing with every toy they could get their hands on. We had a relatively calm contingent in control of the playroom and garden:

And then as the sugar levels increased, a slightly wilder grouping running riot upstairs.  We managed to squeeze seven children into Alex’s tiny playtent:

The girls had fun trying to cram into Sophie’s cot and everyone enjoyed playing hide and seek:

After a super simple lunch (thank goodness for M&S), the moment arrived that Alex had been waiting for all weekend – his cake!  We’d had a number of tantrums over his wanting to eat his cake before his friends arrived, and when it finally was time to dig in, he was super excited.  So much so, that I think he forgot that birthday cake is traditionally accompanied by singing – so the look on his face when all his assembled guests sang him “Happy Birthday” was priceless.  I very nearly cried he looked so overjoyed!

Alex had a wonderful party – and enjoyed some incredibly generous gifts from his friends.  Huge thanks to Ralph, Jake, Emily, Tom, Lucy, Rufus, Liezl, Sasha, Hattie, Tom, Connie, Thomas, Edward, Rosita, Sam, Matthew and Hedley (and all their brilliant parents!).

One person I shouldn’t forget is Sophie – who loved her first experience of a birthday party!  She soaked up as much attention as she could – monopolising the attention of her next door neighbour, Hattie, who kept her smiling amid all the chaotic toddler action!  She had a fabulous time – only 6 weeks until her first birthday!