Today we celebrated Alex’s third birthday – I am amazed I am actually the mother of a three year old! It feels like yesterday we were in hospital meeting him, although it’s hard to imagine him not being part of our lives!  I intend write about properly what Alex is like at three so we remember some of the funny things he does and comes out with – but for now, I just want to remember today.

It wasn’t quite the birthday we’d been planning. Now Alex is three, he’s able to anticipate and get excited about things – so we’ve been counting down the sleeps until the big day. He was so excited last night when it was bedtime that he practically giggled himself to sleep! And this morning he bounded in to our room to find balloons and presents in our bedroom. Such a lovely start to the day to see his beaming smile.  He was delighted to receive some new books, a pirate costume (!), a gorgeous clock for his bedroom (thanks Granddad and Nanny Michele) and some toys and skittles.  Sophie loved the wrapping paper of course!

Sadly, Matt and I had had a pretty bad night with a feverish Sophie 😦 We’d both booked today off so that we could have a special day just with Alex at London Zoo, but instead we ended up taking Sophie to the doctor and sending Alex off to his childminder for the day. Thankfully he absolutely loves it with Jacqui and I think had a wonderful birthday with all his friends!!

From what I understand of his day, he ate a lot of cake and chocolate  – so Alex’s perfect birthday I think! We sent him off with a “Jake and the Neverland Pirates” birthday cake which I hear he had almost as soon as he arrived at Jacqui’s: 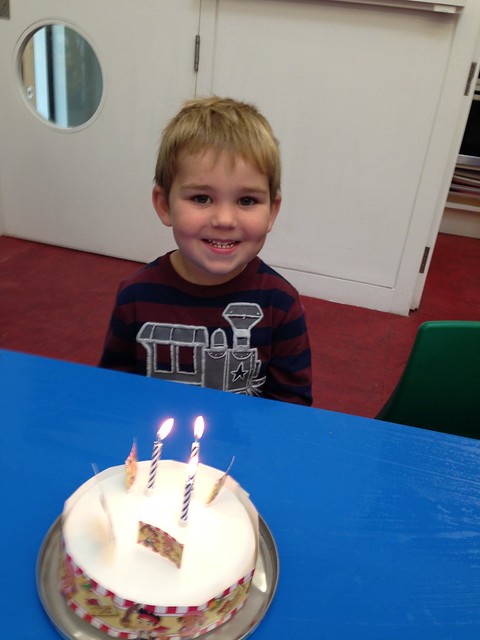 And to match his cake, Jacqui gave him some Jake figures which he completely adores and won’t let near his baby sister!

With Sophie on much happier form (phew), we picked up Alex a little early and headed home for a fun evening of more presents which had arrived today.  He had great fun trying out his new binoculars in the garden (although most of the time he tried to use them the wrong way round!).  I think his favourite present was an old fashioned zig zag racer – I couldn’t get him into bed tonight without him managing a few successful descents!  And the closest he came to a meltdown tonight was when Sophie attempted to play with it!

She and Matt focused their attention on the massive jigsaw that arrived from the USA (thanks Auntie Elaine!) – and Alex adored the monster book that arrived in the same parcel (had to read that three times this evening).

He went to bed one very happy and exhausted boy.  Thanks to everyone for their generous gifts – he loves them all.  And thanks to Jacqui, Mark and “big” Alex for making Alex’s day full of fun and love.  We’re rescheduling our zoo trip for next week so his birthday will go on a bit longer!

But next, it’s his birthday party…  more on that soon.

To close, here is Alex on 12 September (or thereabouts) since he was born.  He’s growing up fast!

Whilst writing this blog, Alex managed to fall out of bed – cue a big bang above my head!  Too much sugar today I think!