It’s a holiday week for Family Agar!  Our childminder is away for the week, so Matt and I are both off work and enjoying lots of time with the children.  And of course, with it being our annual leave (and a British bank holiday) – we’ve already had a crazy week of weather contrast  – but more on that later!

We started our week with another family trip to Greenwich – which is fast becoming our top destination for a London day out.  We revisited the Planetarium (partly so Alex could see the brilliant Space Safari show again, and partly so we could replace his favourite star cup which Matt accidently melted in the dishwasher!) before wandering down to the National Maritime Museum.  Alex absolutely adores the massive ship in a bottle and cascading water feature outside the Museum – so it took us some time to actually get in the door.  We played a lot of “pooh sticks” and Alex managed to get really quite wet!

We spent more time exploring the museum than last visit, not having an exhibition we were specifically trying to see on this occasion.  We found the brilliant children’s gallery and enjoyed watching Alex’s face light up when learning to use a two way radio and morse code.  Matt loved trying his hand at manouvering into port on the ship simulator (perhaps a little too much given its intended audience was children!).

Just before we headed off for lunch, we discovered the Great Map – a fabulous open space which was great for children to run around in.  Alex couldn’t get enough of driving his submarine around the space and got quite frustrated that it was a bit heavy for him to push really fast!

After a rather overpriced lunch in the museum cafe, we slowly walked back up the hill to the car eating delicious ice cream.  Alex told me off for repeatedly licking his ice cream, and Sophie stared longingly at Matt’s for the entire walk back – she’s turning into quite a gannet!

Sunday dawned hot and sunny and we felt quite optimistic about our forthcoming mini break to the South coast!  We set off in shorts and drove down to Shere in Surrey for a lovely roast lunch with Matt’s brother, Richard, and his family.  They have a glorious garden and it was such a treat to sprawl out among the blossom in the sunshine.  Alex adores his cousins, Thomas and Edward, and loved running around after them.  They climbed trees, played on the slide, attempted a game of cricket (!), dug in the sandpit and much more.

I think Sophie enjoyed all the attention she got from her bigger cousins, aunt and uncle – as well as being outside in shorts and a tshirt for only the second time in her life!

We were sad to drag ourselves away from the heavenly setting and hit the M3, but we had to press on to reach Southampton where we were staying near the New Forest for a few days.  Our friend, Katharine, incredibly kindly gave up her new house for three nights so we could take it over (thank you!) and joined us for some interesting day trips!

We were a little apprehensive about spending some nights away from home – it was the first time since Alex stopped sleeping in a cot and moved to a proper bed that we’d been away.  We thought our worst fears were going to be realised when, for the first 30 minutes after bedtime on the first evening, he kept coming out of his room to find us  – but after the novelty wore off, he was fine and stayed in bed until morning.  And super Sophie slept through all three nights in the same room as us (despite Matt’s snoring!).  So, with sleep not an issue – how did we fill our days…

With the forecast for Bank Holiday Monday looking gorgeous, we decided to start our day with a drive through the New Forest to Lepe Beach.  Alex loved spotting the ponies and other animals in the Forest and was incredibly excited about seeing the sea (he’s such a city boy!).  It was gloriously sunny, but incredibly windy – and consequently quite chilly.  But that didn’t deter us (must be the Scottish blood!) and we managed a full hour on the beach.  The tide was out when we arrived, so Alex enjoyed some rock pooling, spotting lots of shells and even some small (dead) crabs.  We bought him a bucket and spade so he could attempt a sand castle – although he mostly just filled his bucket with pebbles!  It was Sophie’s first trip to the sea so we enjoyed showing her the waves and kite surfers.

When we couldn’t stand the cold wind much longer, we headed to the cafe for some warmth and a lovely lunch before climbing up to the playground for games and ice cream.  A very British seaside trip 🙂

When we’d exhausted the entertainment of Lepe, we drove back through the Forest to the Longdown Activity Farm – a favourite of ours from previous trips.  Sophie napped in the car whilst Katharine, Alex and I whizzed around the farm checking out baby chicks, pigs, goats, donkey, cows and other animals. He particualrly enjoyed looking at the hens, and seemed to find being pecked by them completely hilarious! 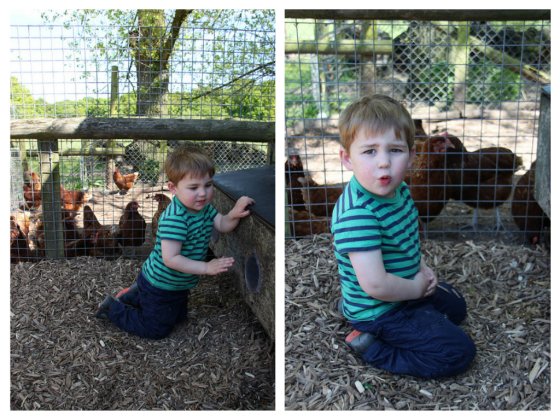 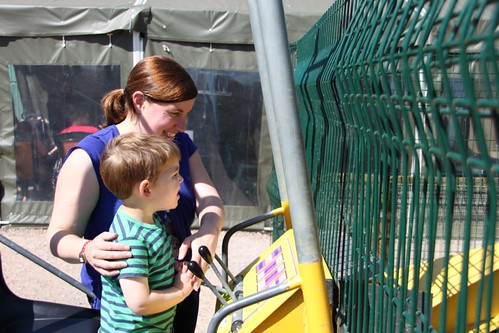 It’s a great activity farm – and I’m sure we’ll be back again on our next trip to the New Forest when hopefully Sophie will be able to enjoy it a bit more!

Tuesday couldn’t have been more of a contrast – we woke to dark skies and heavy rain :-(.  But that didn’t dampen our mood – for Tuesday heralded the event Alex had been patiently waiting for over the past week.  We were going to Peppa Pig World!  Every day since we told him we were going, he’s asked us “Are we going to Peppa’s house today?” – and it was fun to finally be able to tell him we actually were!

Luckily for us, the horrible weather meant that not many other people braved the theme park – so the queues were relatively short, giving us the chance to go on most of the rides.  Alex’s face when we first saw Peppa Pig World was such a picture – he could barely contain his excitment.  He chose the tallest ride of all to start – and enjoyed floating on a cloud up to the top of Windy Castle.  He drove Daddy Pig’s car, sailed Grandpa Pig’s boat ride and rode his train.  And his favourite of all was riding George’s dinosaur!  He even got to meet George and give him a high five!  Very exciting!

Poor Sophie spent quite a long time getting rather damp in her buggy, but she kept smiling despite the fact I forgot to bring the rain cover!  She liked going on the little train with Auntie Katharine! 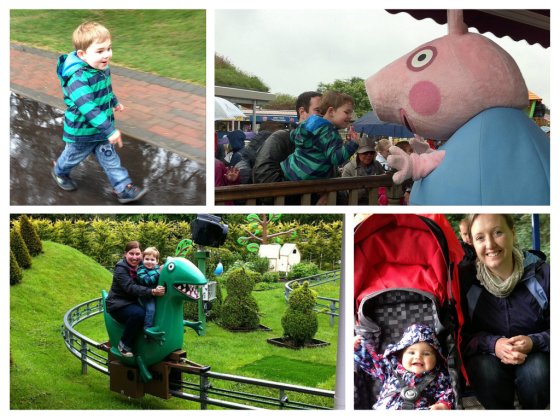 After lunch, we discovered that Alex is developing into quite a thrill seeker.  Matt decided to take him on the swinging pirate ship.  I thought it was a bit extreme for a two year old, but thankfully for Matt, Alex giggled and giggled!  Phew.  The two boys then had a few goes on the very fast and very high water slide – and we had one of our very few grumpy tantrums from Alex when we tried to drag him away!  Here are some rubbish photos of their extreme rides (Matt’s hate me for including the water slide pic – it makes him look enormous!)

Despite the horrific weather, we stayed at the park for hours and had a really lovely time.  I’d definitely go again – although suspect on a gloriously sunny day, the queueing would be a bit much and we’d have much grumpier children!  After splashing in some puddles in the car park, we headed back to Katharine’s lovely warm, dry house and watched Madagascar snuggled up on the sofa!

For our final night in Southampton, Matt and I enjoyed a bit of a treat.  Katharine’s mum babysat, and we headed out together for a curry and proper catch up in Ashurst.  We ordered far too much and all felt like we could have rolled home afterwards, but it was lovely to get out for a few hours!

We woke to sunny skies on Wednesday, so squeezed in a quick trip to Katharine’s local playground before packing up the car and heading to Berkshire.  We stopped in at Matt’s dad’s on the way home – in the one hour drive North, the weather changed yet again, and we arrived in Crowthorne to drizzle.  You’ve got to love British summertime!  Undeterred, we headed off to The Lookout in Bracknell Forest so Matt, Dick and Alex could do a spot of mountain biking. Of course, with a two year old on the back of your bike, you can’t really attempt much of a dramatic course – but the boys did enjoy the green run together! 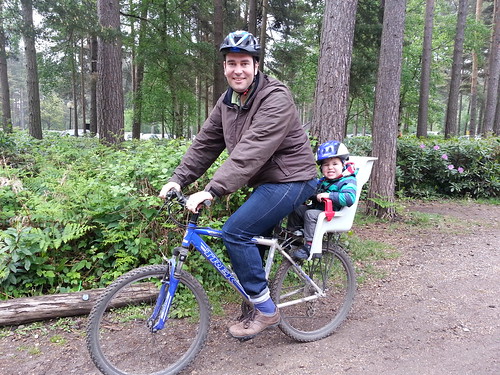 After a couple of laps of the route, I whisked Alex and Sophie off to the adventure playground and left Matt and his dad to do a spot of cycling on their own.  We soon got pretty cold and wet though, so headed back to enjoy lunch with Michele and some playtime before our final drive of the trip – back to London.

We had a fabulous few days away – the children behaved brilliantly, and we really enjoyed some fresh air and family time together.  Can’t wait to get back down to the New Forest – hopefully with more sunshine and calm winds next time!

We’ve got more planned for our final few days off, so expect another trip filled post next week!  In the meantime, just in case this post hasn’t included enough photos, here are all the snaps we took on our short trip South:

One thought on “Four seasons in one mini break”