It’s been a crazy busy weekend, involving two theatre trips, lots of outside time and not quite enough sleep (for Matt and I anyway!).

But it has been such fun 🙂  It started with an unusual Saturday morning excursion for Alex and I.  I’d heard about a local special performance by Samsam the Bubbleman which was raising money for a great cause.  Samsam performed at the 2012 Olympic Opening Ceremony and holds 9 Guinness World records for various bubble achievements!  Given how much Alex loves bubbles, I thought it was the perfect thing to take him to – and I was right!  He loved it (as did I)!  Alex was very brave and went up to the front during the performance to try and catch some of the bubbles.

The pictures aren’t great as it was quite dark – but you get the idea!  Samsam did some truly amazing things with bubbles – and I must admit I was a bit jealous of the lucky children who got to go inside a bubble – that must look very strange!

After the bubble show, Matt and Alex headed off to the Brockwell Park adventure playground for the afternoon.  Apparently, Alex spent nearly an hour playing in the massive sandpit (and I am still finding huge amounts of sand around my house so they clearly both had fun!) 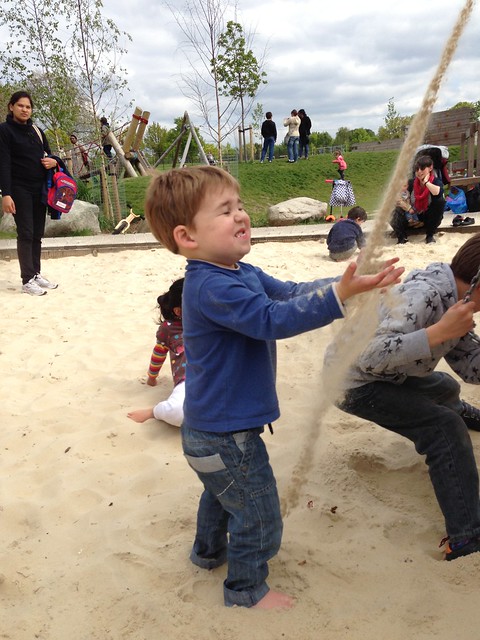 Matt took Alex to watch the BMX riders on the track in the park – Alex seemed keen to have a go, so we must get his balance bike out again and see if he’s more enthusiastic about trying to ride!

Sophie and I had a much quieter afternoon catching up on laundry and grocery shopping – fun fun fun!

Once the children were tucked up in bed, our lovely babysitter Emma turned up, and Matt and I headed out on date night.  We had a lovely meal at the Brockwell Lido Cafe overlooking the pool – it was so relaxing and we even managed not to talk about the children all evening!  After dinner, it was still quite early and mild, so we wandered through Brockwell Park where a free open air showing of “Spirited Away” was on.  I’m not a huge fan of the film, but the atmostphere was amazing.  There were loads of people enjoying the film on picnic blankets, surrounded by lanterns and the glorious London skyline – and even better, there was fresh popcorn, cakes and beer at little market stalls.  I just love living in Herne Hill!

Today has been even busier.  The morning started as most Sundays do with Matt and Alex swimming in Dulwich and Sophie and I stocking up at the Herne Hill Farmers’ Market.  After a speedy lunch of quesadillas, Matt took Alex off to his second theatre trip of the weekend – to see Chris and Pui (of CBeebies “Show me, show me” fame).  Alex seemed to enjoy himself (although Matt says he prefered the chocolate ice cream at the interval!).  It’s so nice that Alex is getting to the age where we can take him to the theatre.  I’ve just booked tickets to a puppet performance of his favourite book (Bear Hunt) in a couple of weeks. Can’t wait!

When the boys got back, we headed straight out again to the Dulwich Park Fair – the culmination of the brilliant Dulwich Festival.  Alex had a few meltdowns because we wouldn’t let him have another ice cream, but thankfully not so many to spoil the excursion.  He, of course, loved the rides – going on the merry-go-round, inflatable slide and a rocket ride.  His absolute favourite thing was pretending to be “Mike the Knight” and learning some archery:

Sophie enjoyed all the bustle and noise at the fair – lots of things for her to look at.  She’s still too small for the rides, but not the swings: 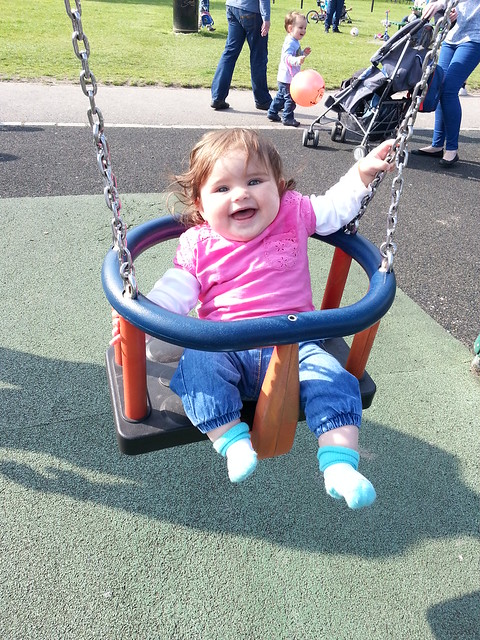 In other Sophie news, she’s eating like a trooper now.  It’s hard to believe that a couple of weeks ago having food anywhere near her mouth made her gag!  And I’m delighted to report that she will happily eat my homemade purees (although I think she prefers shop-bought pouches like her big brother!).

And the biggest news of the week – she’s cut her first tooth!  Probably time to stop breastfeeding!