We’ve been making the most of finally getting some proper Spring-like weather – hence my blogging silence.  I’ve been too busy being outside!

Last week was pretty busy with me spending a half day in the office getting ready for my return to work (less than 3 weeks to go!).  That meant that Sophie and Alex spent a half day together with Jacqui.  It felt incredibly strange being on the train to the office on my own, wearing heals and make up and without a nappy bag in sight!  But it all went fine – Sophie enjoyed trying some toast and meeting new friends.  Here she is looking very relaxed with her big brother and her new friend, Jacob: 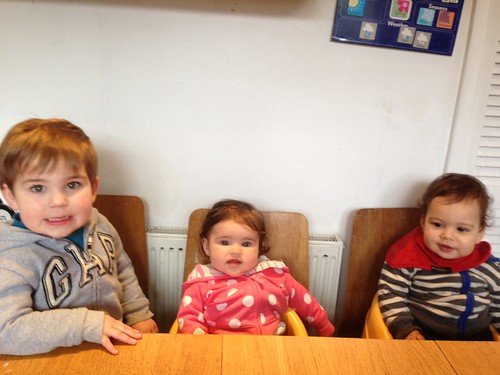 Saturday dawned beautifully sunny, so we bundled into the car and headed off to Blackheath and Greenwich for the day.  It was pretty busy with preparations in full swing for the London Marathon the next day, but there was still more than enough space to enjoy the beautiful park and views: 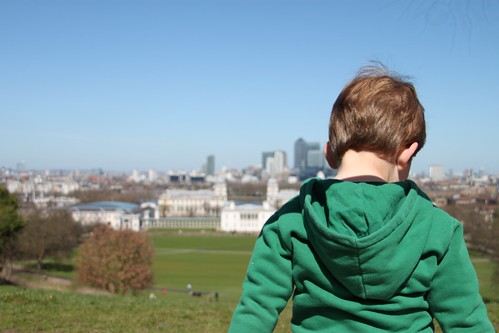 Matt took Alex into the London Planetarium to see a special show for pre-school children called Space Safari.  Alex apparently loved the tour of the solar system – particularly because he’s now learned the names of all the planets from the wall stickers in his bedroom (we have to say goodnight to them every evening!).

We then all headed down to the National Maritime Museum to see the Ansel Adams photography exhibition.  It was quite a struggle to actually get Alex into the building as he fell completely in love with the water feature outside:

Once we’d finally persuaded him to enter the museum, he did enjoy running around the exhibits – being particularly interested in lighthouses: 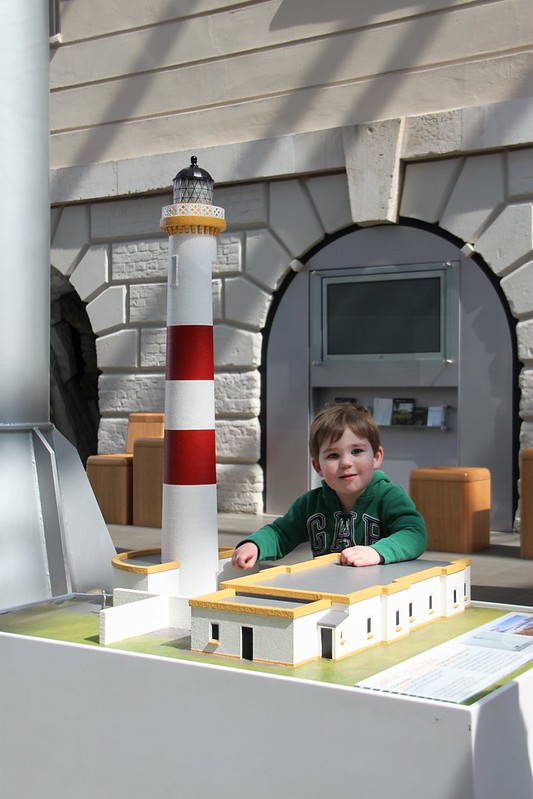 We did manage to check out the stunning Ansel Adams exhibition – at very high speed as neither child was interested (although Alex did like a couple of the pictures of waves crashing on the beach as they reminded him of Octonauts episodes!).  It wasn’t long before the glorious sun beckoned us back outside though, and we found another brilliant water installation to entertain Alex whilst we enjoyed lunch:

It was such a pleasure watching him splashing around barefoot in the sunshine – he’s definitely an outdoors boy!

After some scrummy ice cream and a quick loop of the Cutty Sark, we trekked back up the hill in Greenwich Park and drove home to meet Auntie Katharine who’d popped up to London for some babysitting duty.  Once the kids were safely tucked up in their beds, Matt and I got dressed up and headed down to the Brockwell Park lido for our friends’ wedding reception.  We had a lovely evening catching up with friends, dancing, eating croquettes and huge amounts of cheese – and even spotted the International Space Station passing in the clear night sky above the pool.

Sunday was a bit quieter.  Katharine, Matt and Alex visited the Herne Hill Farmers’ Market to pick up some cakes for afternoon tea, whilst Sophie and I cooked a Sunday roast.  We timed everything perfectly, so Sophie napped while the rest of us ate vast amounts of food!  We’ve finally reached a point where Alex will sit with us properly for a full meal and join in with conversation – it’s a real pleasure to sit as a family!  Just need to get Sophie interested in food now.

With Katharine about, we decided to try and get a picture of the four of us.  Yet again we proved to be highly unphotogenic, with Matt and I showing the effects of an unusually late night, and the children refusing to pull nice faces.  Oh well – we’ll get a good photo one day!

The final act of a fabulous weekend was getting Alex through another milestone – removing the sides of his cot!  He was very excited to see his new “big boy bed”, and we were very worried that we’d suddenly have little visits from him once he realised he could get out of his bed for the first time!  But, we gave him a new “Gro Clock” and told him to stay in bed until the sun comes up – and so far he has!  In fact, it appears that he wakes up before the sun rises in his cot, and sits in his bed waiting to watch it come out!  It’s hilarious listening at the door for his exclamation each morning!

I shall leave you with a nicer picture from our mini photo-shoot – me and my girl: