Last night was a big night for Family Agar – we finally persuaded Alex to give up his grobag sleeping bag and wear proper pyjamas under his duvet!  Until now, he was very excited about his new duvet and pillow, but insisted on also wearing his sleeping bag underneath.  Poor boy must have been overheating every night!

But yesterday, he was finally wooed by some new helicopter pjs and agreed to try them out!  Here he is looking very proud of himself at bedtime: 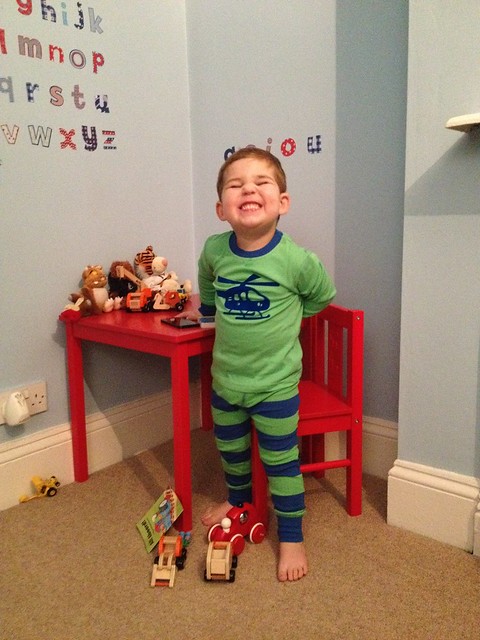 He snuggled up nicely under the duvet, and when I checked him later, he was still tucked in.  I was a bit worried he’d get cold or confused in the middle of the night, but we didn’t hear a peep out of him.  And when I went in this morning, he was thrilled to tell me about his stripey PJ bottoms and kept making helicopter noises.  So funny!

Hopefully his enthusiasm will continue this evening.  Maybe one day we’ll take the sides off his cotbed…