We’ve lived in South London for fifteen years and have often heard people raving about Eltham Palace which is just 30 minutes from home, but never quite managed to visit it.  So, with a free day during half term and armed with our new English Heritage membership cards, we decided to finally make the trip.  I’m now kicking myself for not doing it sooner, as it is truly stunning!

As soon as you step inside, it feels like you’ve been whisked back to the 1930s.  Eltham Palace is a sumptuous and decadent art deco home, where it’s obvious that it’s previous owners – the glamorous Courtaulds – lived a luxurious, fun-filled existence.  I loved exploring the many rooms that have been lovingly restored and could totally imagine what it would’ve been like attending a party at the Palace back in its golden age.

Alex and Sophie were made to feel really welcome, and loads of the displays were really geared towards children.  I was comfortable for them to explore quite independently, so they led the way a lot of the time – with much of the space open, and so many of the exhibits very hands on, I didn’t have to panic about them breaking everything!  Sophie particularly liked Virginia Courtauld’s rather bling bathroom, and Alex was a fan of the spectacular domed entrance hall.

I was so impressed that there was an audio tour specially designed for children.  Alex got completely engrossed, following the instructions and completing the activities that were included on the touch screen he’d been given.  Three days later, he still keeps sharing facts he picked up from the audio track!  His favourite story was about the animals that lived in Eltham Palace – he loves that Virginia had a pet lemur called Jongy who had its own room and who could climb down a bamboo ladder to have free reign of the house!  Here he is with his audio guide telling Sophie about the Courtauld’s dining room. 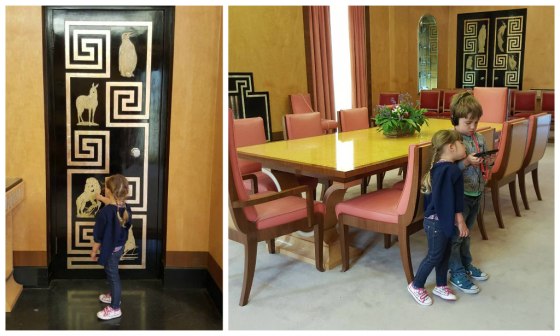 As well as the audio guide, there were hands on boxes in every room full of things to smell and touch (the kids weren’t fans of the smell of cigars!).  And there was the obligatory trail where the children had to collect stamps in various rooms – here’s Sophie getting her stamp in the medieval hall (the oldest part of the Palace, built over 500 years ago for Edward IV).

Our very favourite thing at Eltham was the many opportunities for dressing up!  Alex was particularly keen on this and as soon as he saw a dressing up station, he headed straight over!  I think I took one of my favourite pictures of him ever – he very enthusiastically made the most of Virginia’s dressing room and donned pearls, a fur, gloves and a beautiful hat (I didn’t prompt him at all – he did this by himself!).  It makes me laugh every time I see it!  They also dressed up as 1930s young men and WW2 air raid wardens!

Feeling peckish after our costume changes, we wandered from the Palace to the lovely cafe for lunch.  The children couldn’t wait to finish so they could get outside to have a go on the brand new adventure playground.  They loved it so much, it was quite a struggle to drag them away for the short drive home.

We absolutely loved the Palace – and I know we’ll be back very soon to explore the grounds.  They’ve got jousting on in a couple of weeks, so we may head down for that!  Eltham Palace may well be our new favourite weekend haunt!