Tumbling Bay sound rather romantic I think – it makes me imagine a remote, rugged beach somewhere…  But it’s actually the name of the fabulous playground in the Queen Elizabeth Olympic Park in Stratford, and the venue of our final family excursion of 2015!  With Katharine and Emilia visiting, and the weather clear and bright, we decided to get some fresh air and let the kids tire themselves out.  We head out to Stratford fairly regularly, as we love visiting the Olympic Park, but it was Katharine’s first time so we were excited to show her Tumbling Bay.

We chose to drive over so Emilia could nap, but traffic was bad and we got a bit lost – making me doubt whether it was a good idea to head to the otherside of London – but a picnic lunch in the Olympic Velodrome watching cycling practice soon made me remember that I adore visiting the Park.  We wrapped up warm as the weather had turned decidedly chilly – I’m not sure Alex and Sophie were that keen to be outside when we arrived…

But they soon cheered up when they remembered the playground!   Sophie loved showing Emilia the slide.

She went down it countless times!

Alex, meanwhile, was exploring the huge web of climbing nets:

And clambering over the bridges and through the tunnels on the enormous climbing frame.  He loves his eskimo coat!

Here are the girls heading off to bravely follow the long, wobbly bridge by themselves.  I love them holding hands – they are becoming such gorgeous little friends!

At the end of the wobbly bridge is a massive sandpit which was a particular favourite of Emilia who spent ages digging with a friend she made (who helped her over the bridge when Sophie deserted her up there – whoops!).

And here’s a happy Emilia on the swings.

With a safe network of paths around the playground and beyond, it was the perfect place for Emilia to have her first ever go on a scooter.  She was a natural and was soon scooting much faster than I think her mummy hoped she would! 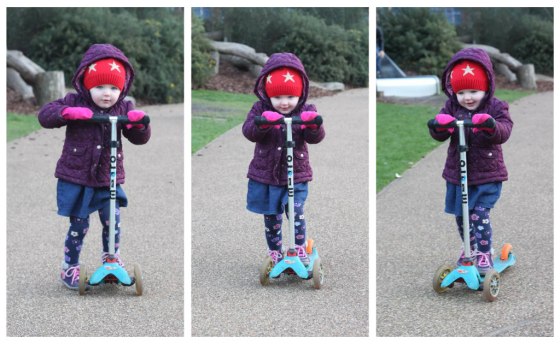 With the light gorgeous, we stopped for some photos by the Olympic rings and velodrome – I still get such a buzz from being in the 2012 park.  It’s transformed so brilliantly into a great place to visit any time of year.  We’re already looking forward to coming back in the Spring to enjoy all the water play! 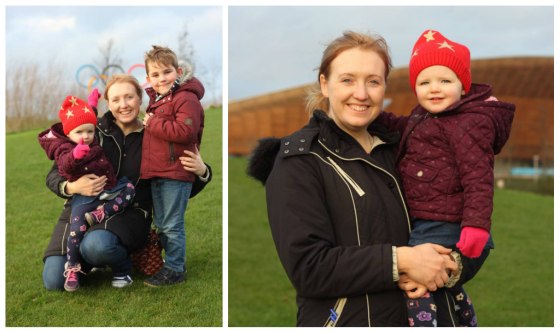 I love this shot of the gang being themselves!

Here we are in the final daylight hour of 2015.  It was a perfect afternoon, which was followed by a chilled out evening drinking bubbly and chatting with friends over dinner in my kitchen – my ideal New Year’s Eve.