Look at my lovely new blog design! Big thanks to Ellie Illustrates for the beautiful design – what a treat!

If only I had a super exciting post to share that was worth of such a professional look!  The recent heatwave has result in so many water fights and hose sessions that I haven’t dared have my camera out.  But we’ve certainly been enjoying the sunshine.  I love how easy it is to get ready and out of the house now the children are in shorts, tshirts and sandals – no more faffing around with socks and jumpers.

They have spent almost every second of the day outside and are brown as berries!  We had a wonderful day last weekend at Matt’s old secondary school where he celebrated 20 years since leaving (how are we that old?!).  He went to a boarding school set in some seriously stunning grounds.  It was boiling hot, but the children ran and ran having a brilliant time exploring with their friend, Rosita (whose dad randomly went to school with Matt).  They jumped on the bouncy castle until they were scarlet and then ran riot around Matt’s old boarding house – jumping on the beds and hiding in the rooms.

They were so hyper that it perhaps wasn’t wise visiting Matt’s parents straight afterwards.  They continued to run riot around their garden, splashing in the paddling pool and chasing each other.  I’m not sure Koko, their new puppy, quite knew what to make of my crazy duo.  Despite the chaos, it was lovely to catch up with Dick and Michele and to enjoy cuddles with the dogs.  Not sure we’ll be invited back for a while though 😉

Here they are in a very rare stationery moment!

They slept well that night!

On Sunday, we were back in Brixton for our usual morning swim.  Alex’s independent swimming is coming along in leaps and bounds.  We were worried that he enjoys being underwater so much that he wasn’t listening to a thing in his lessons, but he can suddenly swim for a good 5 metres in a really good, flat position so clearly some of the instructions were going in.  Now he just needs to learn to take a breath without having to stand up and he’ll be there!  Amazing.

Other weekend highlights over the past couple of weeks include a fabulous trip to Burgess Park to the British Cycling BMX series competition. Some of the youngest competitors were only a couple of years older than Alex! The pro racing was incredible to watch, although I think the children enjoyed the nearby playground a little bit more – here they are showing some sibling love!

We also stumbled upon the concert series in Ruskin Park a couple of weeks ago and enjoyed listening to the London Saxaphone Choir on the traditional bandstand complete with deckchairs – a very British treat after a work trip to Washington DC the week before!

Apart from those highlights, it’s been a really quiet fortnight. Matt and I have both had particularly busy times at work – and the children have been having a blast with their childminder. It seems like they’ve spent the last week entirely in their swimwear at every waterplay in Southwark!

And occasionally with clothes on, they’ve kept cool with lollies and ice cream.

Thanks for the fab photos Jacqui! Life is good when you’re 2 and 4!

We’ve got a busy Summer ahead with our annual camping trip fast approaching, the legendary Lambeth Country Show and family holidays to Scotland and France. And of course, the build up to Alex starting school- he has just 2 weeks left of nursery and only 6 weeks left with his childminder (although brilliantly she’ll be looking after him a couple of nights a week after school and during some of the holidays – phew!).

2 thoughts on “A fresh look and a heat wave” 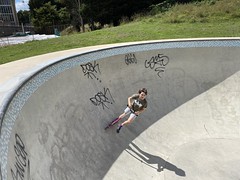