After having to cancel Sophie’s first birthday tea in October when we were all sick, we finally held a little party for her this afternoon!  Inviting all the babies and toddlers from her childminder’s, plus a couple of others of a similar age to her, we had a great afternoon together.  I’d been nervous as Sophie had a horrible cold all last week, and was quite cranky all morning, but the distraction of having her friends over seemed to cheer her up!

Sadly, we took no nice photographs at all, but I’ll remember Alex excitedly opening Sophie’s presents and playing with them before she got a look in, all the children happily cuddling Jacqui (their childminder) throughout the afternoon, Alex and his best friend Sam sneaking off to play in his room away from all the babies, everyone being very well behaved over our pizza tea and Sophie standing proudly in her highchair as everyone sang Happy Birthday to her.  And because Alex had been a good boy all day, he was allowed to blow out the candle on her butterfly cake!

I enjoyed a couple of glasses of bubbly – it seemed only right to celebrate a whole year of Sophie’s life!  Its hard to believe she was a newborn this time last year.

Here are the only moderately acceptable pics we took – check out the return of Alex’s crazy grin!

The party tea was a good close to a great weekend.  We spent yesterday up in London at the dinosaur museum and rocket museum (A.K.A The Natural History Museum and Science Museum).  We go all the time, but this was the first time I remember Sophie really getting into it.  She particularly adored the basement of the Science Museum, a wonderful place for little ones full of things to touch and do.  I could barely drag her away from the water play and the psychedelic textured fun:

Alex had fun building towers on the earthquake trays and then shaking them down:

And they both enjoyed chasing a Dalek around, marking the 50th anniversary of the show! 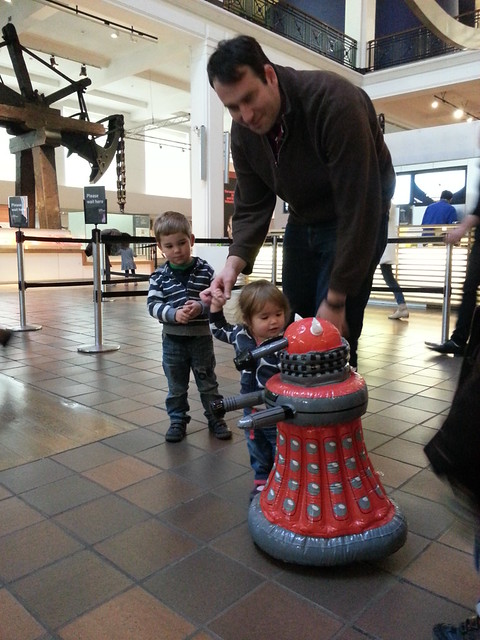 Clearly they were exhausted after going wild in the museums – here they are on the drive home:

Once we were back home and refreshed, we wrapped up warm and wandered down to Herne Hill to give Alex a try on his new scooter (after his old one was stolen last week, much to his total distress).  Sophie was modelling a gorgeous hat made by a friend of mine, Saskia (who I know reads this blog – so THANK YOU!) 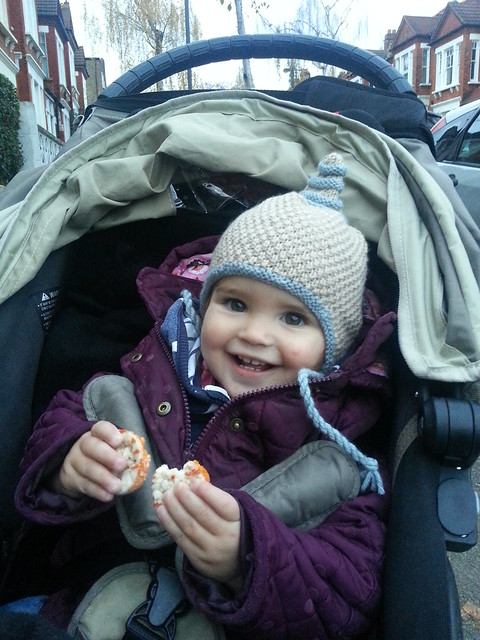 We picked up lots of yummy goodies for today’s party, and spent some time in the brilliant “Tales on Half Moon Lane”, the most wonderful children’s bookshop that has just reopened after the awful flood back in August.  I finally made a bit of a start on Christmas shopping whilst Matt was distracting Alex with books!

Can’t quite believe the weekend is over again – they fly by so quickly now I’m back working full time.  But we’ve got lots of lovely things to look forward to in the run up to Christmas, not least the excitement building in Alex!  It’s such fun now that he’s aware of Christmas.  He even “wrote” to Santa on Saturday promising to be a good boy and asking him to bring him a particular train from Thomas the Tank Engine (it’s already in my Amazon basket in the hope that he’ll behave!!).  Next weekend, the advent calendar comes out – yay!