This is a real time of change for little Sophie – she’s suddenly transitioning from being a baby to being a toddler.  In the past few weeks she’s been ticking off the milestones like a pro.  Her cruising around furniture has been getting faster and more confident for a while, but she’s suddenly started taking a few steps on her own (although usually I would describe what she does as a controlled fall!).

She also is beginning to stand unsupported more and more – as well as get into a standing position herself without holding on to anything to help her up.  I don’t think it’s going to be long before she really is on the move.  Her crawling is super fast now and she can confidently crawl up a flight of stairs (and just loves doing so – we have to be very careful to keep doors/stairgates shut because if we forget, she can be half way up in seconds!)

Even more exciting is the beginnings of language!  She’s perfecting “mama” and “dada” – but I think her first, and most convincing, word was “cat” – an unusual word for a dog-loving, cat free house, but a cute one nevertheless.  She’s getting better at showing us what she wants with impressive pointing and gesturing, and gets feistier by the day by very vocally showing frustration and anger when Alex pinches a toy or won’t let her play with his trains!

Of course, probably the biggest milestone of the lot is turning one year old!  We’d planned a few little treats for her birthday – with her Grandma and Grandpa down for her birthday day and then a little party tea the following day for some of her friends.  Sadly things didn’t quite work out, with Alex and Sophie a little bit under the weather in the build up to her big day, me struck down with a massive headache on the day itself and then Matt so sick the day after that we had to cancel her party!

But we still manage to have a few small celebrations.  On her actual birthday, we had lots of fun opening presents together (or rather, Alex very much enjoyed opening them for her!): 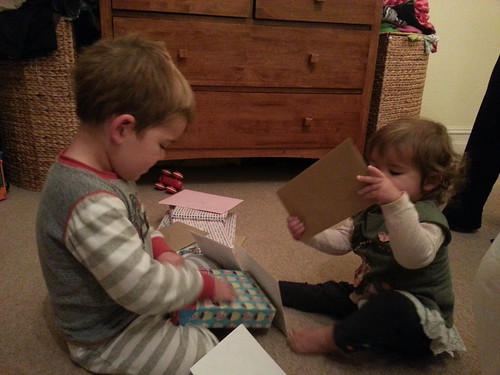 Sophie got some lovely gifts (thanks everyone) – she particularly loves her new xylophone and the gorgeous bird mobile we got for her bedroom: 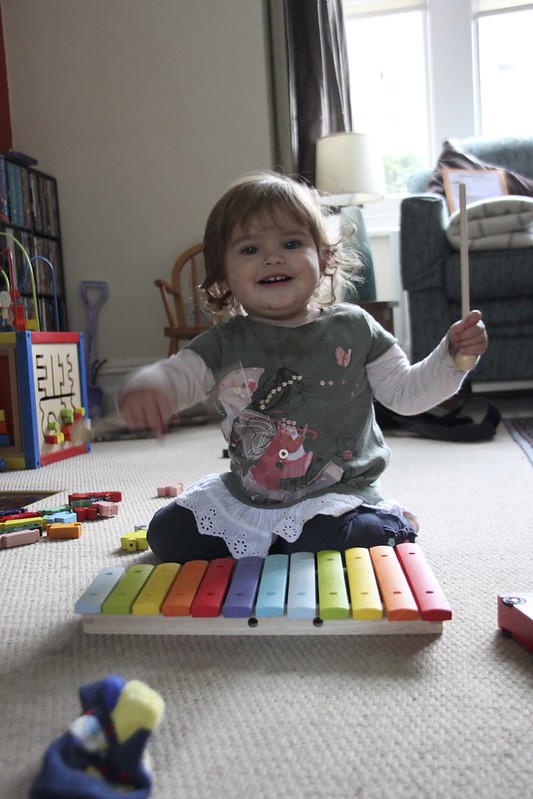 We had birthday pancakes for breakfast and then enjoyed a lovely trip over to the Horniman Museum.  After lunch and a nap, I took Alex to one of his friend’s birthday parties – and Matt took Sophie for a play in Brockwell Park.  He took the camera with him and got some gorgeous shots of the birthday girl.

Can’t get enough of her smile!

And captured a particularly funny series of some dazzling facial expressions:

I can’t believe a whole year has passed since we first met Sophie.  She is such a joy and I can’t imagine our little family without her.