The reality of full-time working and parenting is hitting home as I find it’s already Sunday night and I have masses of admin and work to get done – and little time to do it!  So, in order to not get too far behind with the blog, i’m going to update you on our last week in photographs….

We enjoyed a gloriously sunny bank holiday Monday doing something fairly unusual for within the M25 – we went fruit-picking!  I must admit, we were a little nervous about taking Alex as he’s rather partial to strawberries and we were concerned he’d eat everything before we paid for it – but we thought it was worth a try!  And I’m glad we did – Crockford Bridge Farm was absolutely brilliant.  Really pretty and peaceful, with a wide range of fruit and vegetables to pick, it was such a pleasure seeing my very urban son picking strawberries and raspberries as well as some delicious looking corn-on-the-cob.

There was a good restaurant in the garden centre next door which also had a huge aquatic centre selling tropical fish which both Alex and Sophie loved looking at.  And best of all, there was a great adventure playground and ice cream parlour on the farm.  We easily filled the day there and it was wonderful to be outside in the warm sunshine all day – made me remember why I live in London and not Edinburgh!  It was slightly unfortunate that after dinner that evening, Alex decided that the fruit was yucky and opted for a yoghurt for pudding – but Matt and I enjoyed a delicious crumble (thanks Bry for the recipe!)

After such a busy few weeks, we chose to spend this weekend a bit closer to home.  Yesterday Alex had a fun morning playing with his friend, Arlo, in the Brockwell Park Adventure Playground: 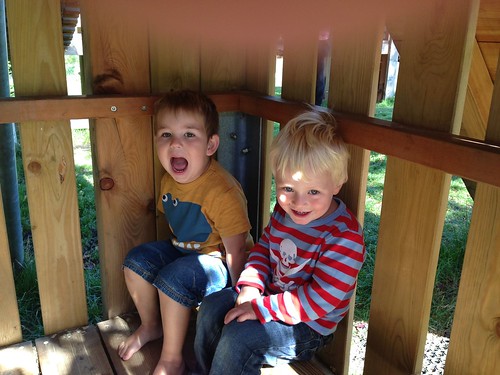 And we spent the afternoon at Myatt’s Fields, enjoying the water play and fabulous playground.  We did attempt to get Alex on his balance bike, but he couldn’t be persuaded off his scooter!

Today we took our friend David, and his son Josh, to one of our favourite places in London – Greenwich, where we explored the Cutty Sark.

After lunch and some Meantime Ale, we then let Alex partake of one of his very favourite pastimes – playing in the water features at the National Maritime Museum (and getting very wet in the process!).  This time, Sophie could also join in, finding the waterfall ideal for some cruising practice.

We took the river boat back up to London Bridge, which is always fun – such a great way to head back into the city and a treat for Alex who was excited about being on a “real boat”, although he kept announcing the anyone that would listen that we were about to crash!  He’s still working on his quiet voice!

It’s been a lovely weekend – I fear one of the last of the Summer – so I’m glad we spent as much of it as possible outside.  Here are my family just chilling out in the garden – heaven. 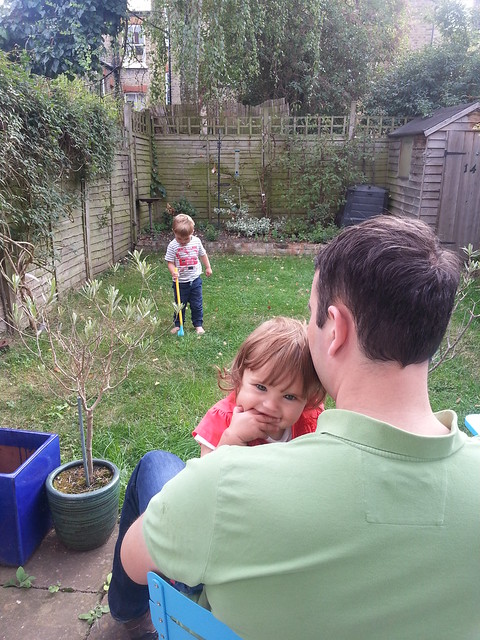 Before I go, just some major personal news, I had my very first night away from both children this week!  I spent a night up in Manchester with work where I was speaking at a conference and collecting some awards on behalf of my team.  I had a wonderful time – and even stayed out dancing until 2am.  How unlike me – but what fun!

One thought on “Fun in photos”