We’re midway through two wonderful weeks of annual leave (or at least we were when I started writing this post!). Our childminder is enjoying a well-earned rest, and we are packing in as much family fun time as possible. I know I am going to be shattered by the time I have to return to work!

We’ve managed to squeeze in plenty of admin – all of us have had haircuts (even Sophie who had her crazy fringe trimmed for the very first time so she could see properly – and so I didn’t have to keep putting her in comedy top-knots!) 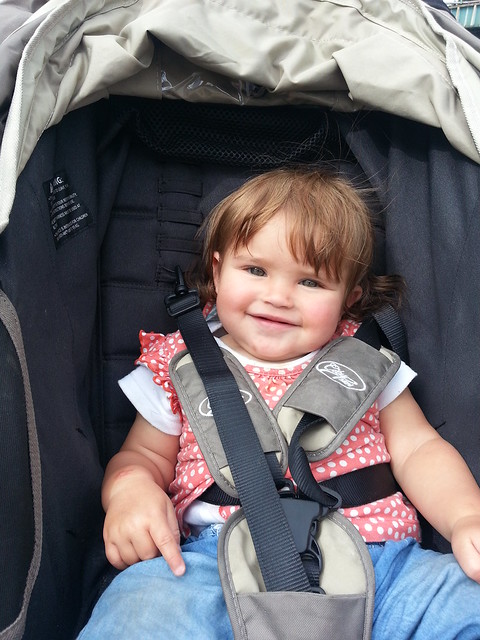 We’ve had new shoes, the car’s been MOT’d, Sophie went to baby clinic for a weight check (!) and our grass has finally been cut.

But mostly we’ve been concentrating on enjoying ourselves!

We spent our first few days in London, starting with a trip to Battersea Zoo. It’s a while since we’d been and Alex loved exploring it anew. The lure of the amazing adventure playground there was pretty strong, but we did manage to see all the animals before we let Alex loose! He loved the meerkats, monkeys and donkeys (!) and Sophie enjoyed the space to crawl around. We nearly persuaded her to crawl down the meerkat tunnel, but she didn’t get very far! But their favourite thing of all was, of course, the playground.

After the zoo, Alex and Matt explored the Thames Path, checking out the Battersea Power Station up close, and inspecting the “Cranky cranes” along the river (you’ll need to watch Thomas the Tank Engine to understand why Alex enjoys that!). Meanwhile, Sophie and I enjoyed a ladies trip to Sloane Square the Peter Jones! Fabulous first day of the hols.

Over the next couple of days, we stayed pretty local to Herne Hill enjoying some quiet time. There was plenty to look at locally given the recent flood – Alex is fascinated by the massive hole in the road and huge number of diggers repairing it!

We’re now swimming each week as a family – Sophie LOVES splashing her brother in the water, and Alex is doing amazingly well swimming with his “SwimFin”, and is now able to swim widths on his own using just his fin and a float. Brilliant! We visited a great little pool in Battersea which is super shallow and warm, and has a little elephant slide and regular waves. We could barely get Alex out of the water to go home! 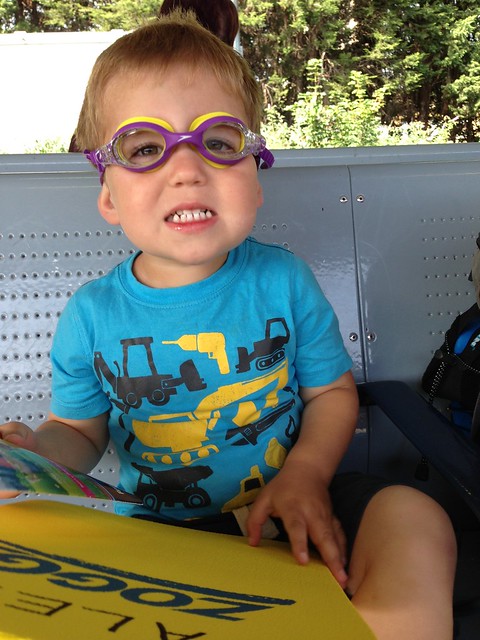 But I called this post “Escape the the Country” – so I should move on to our first little holiday of the Summer! My parents are settling into a little village called Blakesley in rural Northamptonshire – and we paid them a visit for a few days. It was the first time we’ve ever visited my parents since having children as they’ve been in the USA until recently – and they went to town! We arrived to find bedrooms set up for both children, including funky bedding for Alex and a cot for Sophie. There was even a fully stocked toy box! On discovering this, and the fact that there are cows at the end of the garden, Alex was in heaven!

Things got better on our first full day with a visit to the Rookery Open Farm near Towcester. We were in danger of not seeing any animals at all as the main entrance of the farm contained an enormous soft play. Even Sophie loved it, making the most of the massive baby and toddler area: 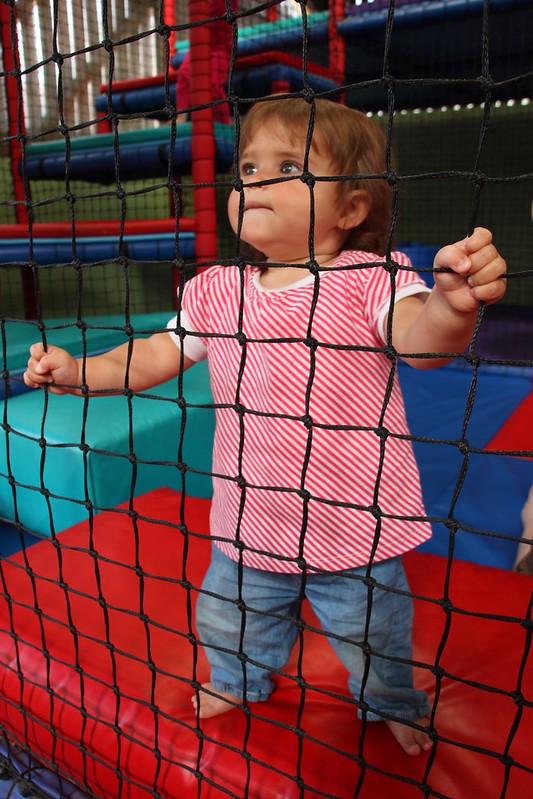 But we did make it around the farm itself, petting rabbits and baby goats – and Alex learned (and now loves) the words “cow pat” thanks to the fields we passed! We even conversed with gobbling turkeys (which Alex found quite hilarious) 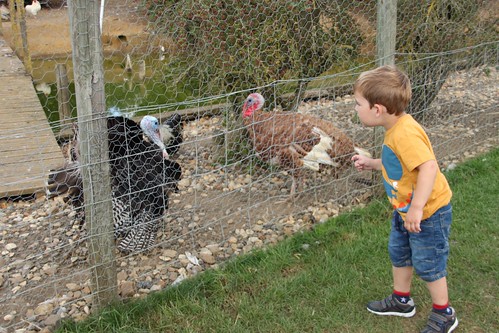 Best of all was the massive outdoor playfield full of diggers and tractors to climb on. We had one very happy and exhausted boy by the end of the morning 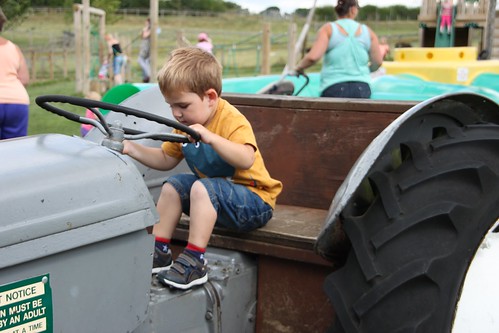 We calmed things down a bit later in the day with a visit to the beautiful National Trust house – Canons Ashby. Alex was initially disappointed that the gravel paths made scooting impossible (and I struggled a lot with the buggy), but he quickly brightened up at the prospect of learning to play crocket with his dad! 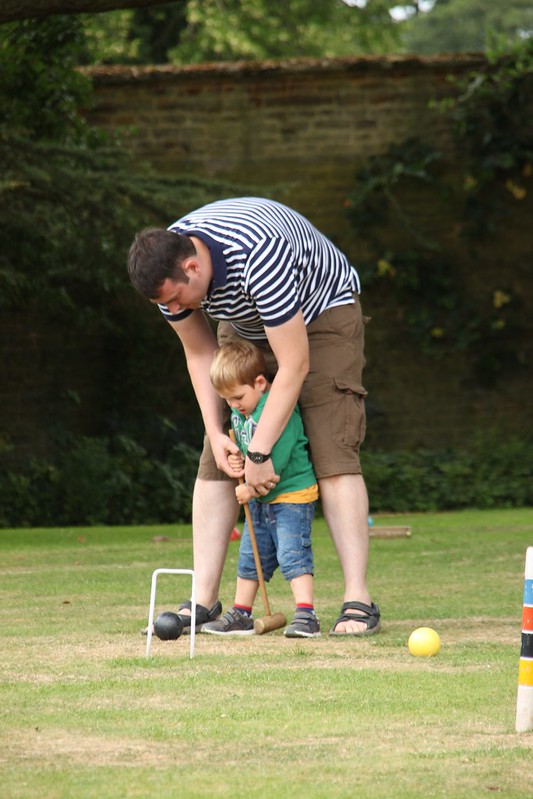 The house and gardens were beautiful, full of flowers, produce, bees and butterflies – I really enjoyed a peaceful walk around, as well as the delicious lunch and cake we enjoyed in the lovely tea room there. I’d highly recommend it to anyone passing by.

A big benefit of my parents’ new location is the fact that it’s only a 40 minute drive to our NCT friends Bryony & Dan – so we took the opportunity to enjoy a quick day trip to their new house in a beautiful village in Oxfordshire. Alex and Freddie had a blast running around their stunning garden, inspecting the strawberries and little pond – as well as climbing the many apple trees. 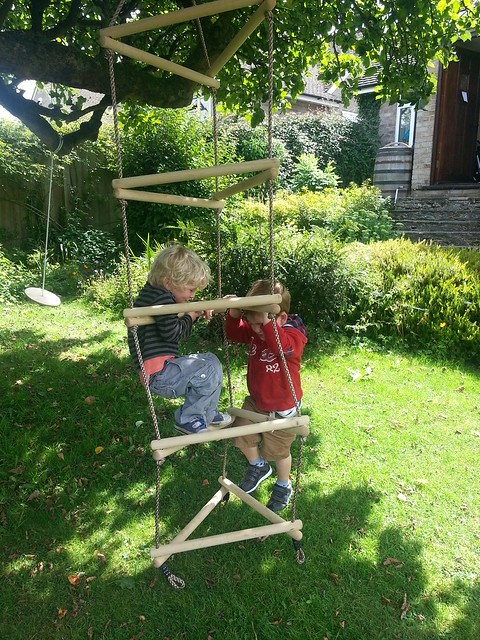 And when that all got too much, they played with every single one of Freddie’s cuddly toys! 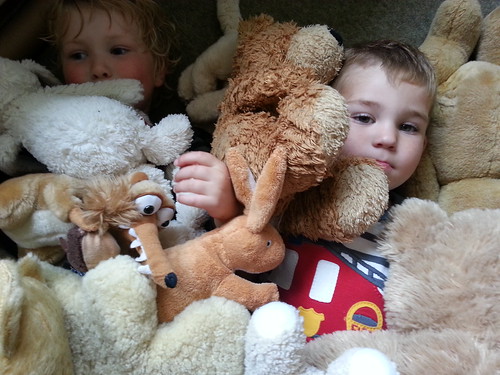 In the meantime, Bryony and I had a bit of time to catch up with our little girlies (before the heaven’s opened and soaked us all!): 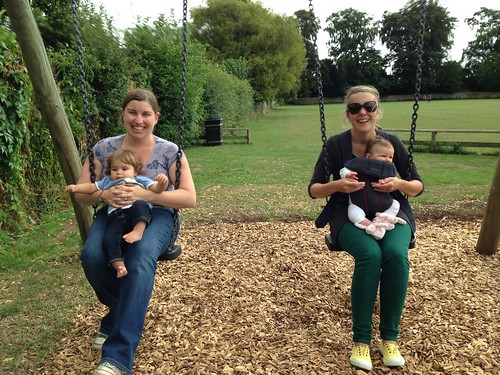 A lovely day – one that I hope will be repeated soon!

On our final day in the Midlands, we went on a day trip to Milton Keynes (yes, I know – not an obvious choice for a rural break!). But we’d heard they had a massive artifical beach set up for children and a helter skelter! Once we eventually found it in the enormous shopping centre, Alex enjoyed it for a few minutes – but he was much more taken by the dinosaur mini golf: 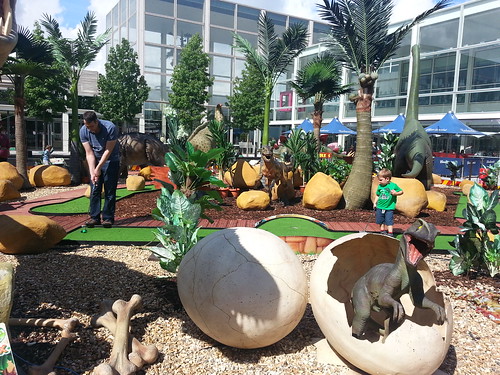 Actually, Matt was most enthusiastic about the golf – Alex prefered the massive animatronic T-Rex that roared at the players periodically!

After enough urban sprawl, we headed back to the village to enjoy a lovely ramble around the local fields followed by ice creams in the garden. Heavenly. 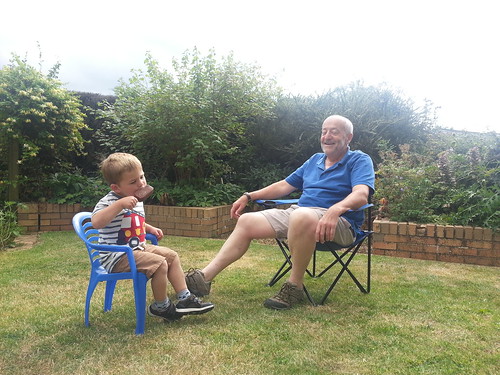 We had a lovely few days away, made so easy by my parents being super prepared for us, and really relishing the opportunity to play with their grandchildren! Matt and I even got to enjoy a date night at the local pub – what a treat!

Must get this published now – so I’ll save the second week of our holiday until another day. Coming next… our first flight with children, attempting the Edinburgh Fringe with a toddler and fun with the Great Grandparents!

But before I go, here are all our snaps from our trip to the country in case you want more!