Gosh – it’s 2 months since my last post – but I hope you understand it’s been a pretty busy few weeks!!  As you should know by now, we have a new arrival in Family Agar, but before I introduce her to the blog, I feel I need to just write about another big event late in the Summer – Alex’s 2nd birthday!  Things were a lot more fun this year as he is beginning to understand birthdays.  Or at least, he understands that birthdays mean cake, candles and presents!  He can do a pretty good rendition of “Happy Birthday to You” and knows he is 2 years old if you ask him.

So he was pretty excited when he woke on 12 September to a big pile of presents.  He’s really into music, rhythm and dancing, so against my better judgement, and after much pushing from Matt who fancies Alex as the next Dave Grohl, we got him a beginner drum kit!  And since he’s obsessed with the one at his childminder, we also got him a little pink pushchair!  He also got lots of lovely books, Thomas trains, gorgeous clothes and games – lucky boy!

A couple of days after his birthday, we headed to Richmond for a big Agar family gathering celebrating multiple birthdays.  It’s hard to imagine now as I type this in freezing December weather, but it was a scorcher of a day and we had a wonderful time outside having a barbecue and watching 10 cousins playing together.  Alex received a brilliant scooter from Dick and Michele which he insisted on pulling around rather than riding – we’ve got some practicing to do!

Here are some pictures of his birthday week – including a few of him drumming like a real rocker!

A week later we held a little birthday party for Alex – he had a few of his friends round for games in the garden and they had a fabulous time running around.  Much to Alex’s joy, he had a big birthday cake with candles – and we had to relight them multiple times so all the children could have a go at blowing them out (or rather spitting on the cake!).  Here’s the birthday boy with his cake: 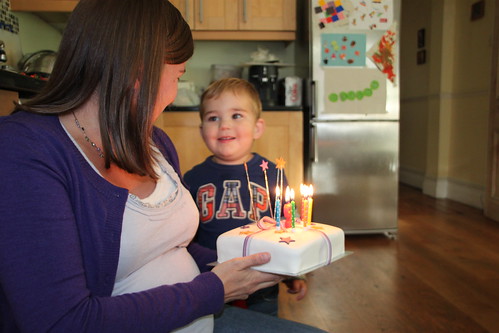 Here are some pics of the party

So all in all, Alex had a fun 2nd birthday – and now is obsessed with cakes and candles. Not sure how he’ll wait another year to celebrate again!

October was a quieter month, partly as I was a lot less mobile!  But we still made it down to Kent to see Thomas the Tank Engine Live (yes, real, life size Thomas trains) – Alex was beside himself!  Here he is with “Emily” train: 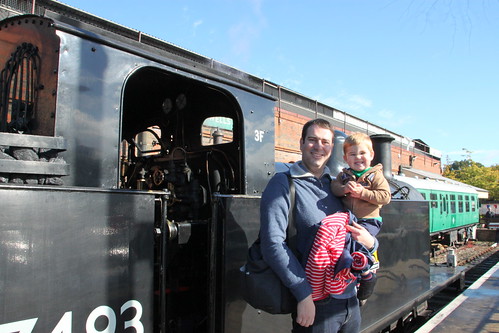 We enjoyed some lovely Autumn weather in our local park: 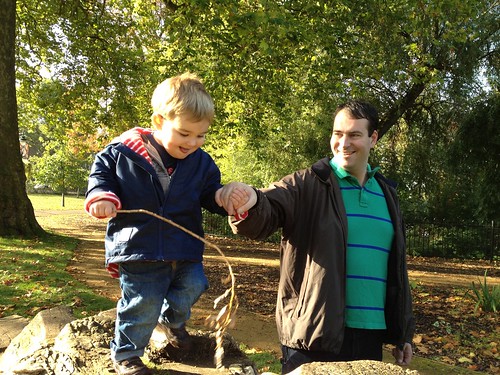 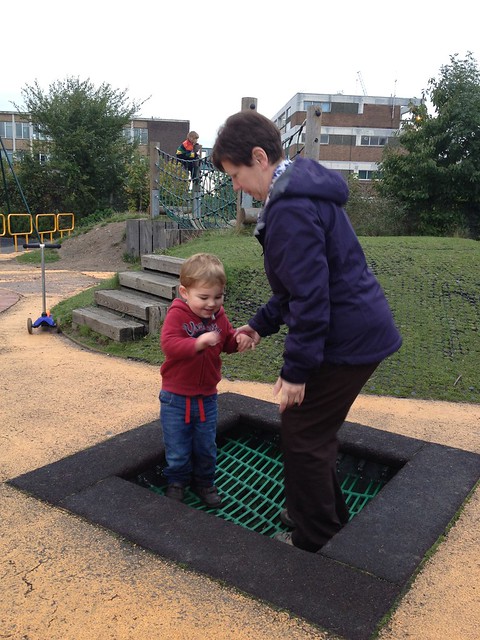 But more on the baby in the next post – can’t write more now as she’s stirring from her nap!

But how about a comedy video to close – here is Alex at his childminder performing “Incy Wincy Spider”… well, most of it, until he decided he actually wanted a frog toy instead.