With such a mild end of 2011, I kind of hoped that we’d managed to escape Winter – but clearly I was wrong.  Temperatures have plummeted and as I type this, I can see snow in the garden.  The cold has made entertaining Alex more challenging, as leaving the house takes twice as long because of all the layers he’s wearing.  And I am now enjoying daily battles over glove and hat wearing (getting the best success out of a hat that fastens under his chin and gloves on a string!).

We’ve still had plenty of fun though.  Now the Christmas holidays are over, we’ve been seeing friends when we can.  Here’s Alex and his little friend Jake, spending an afternoon in a Dulwich pub! 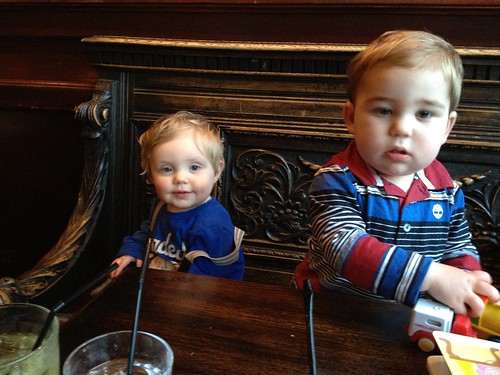 We braved the elements last weekend, heading down to Godstone Farm for a day out.  Alex adores it there.  When we finally managed to drag him out of the amazing play barn and softplay, he was really engaged with the animals.  He’s learning lots of animal names and noises which is hilarious.  He enjoyed petting rabbits and guinea pigs (although I’m less sure they enjoyed the encounter – we’re still learning how to be “gentle”).  He shouted “baaa” at the sheep, and made friends with a tiny pony (yes, this really is a pony and not a cow!). 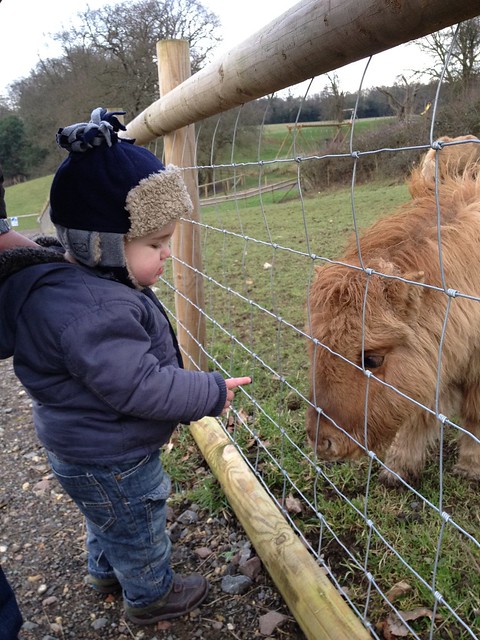 The pony tried to have a much on Alex’s finger shortly after that was taken, and Matt and I had a terrifiying couple of seconds when we were a little concerned the horse might have munched it right off! Thankfully all digits are intact!

Apart from that trip, we’ve generally stuck to South London, enjoying “Bea’s Baby Bop” music class yesterday and a trip to Brixton soft play today. Yesterday afternoon, we enjoyed afternoon tea with some of our NCT class.  Our friends Shelly & Pete had prepared an incredible spread of sandwiches and cakes, and we all had a fabulous time chatting and catching up.  It’s great seeing the boys together – there were four 16 month olds there having fun.  I can’t believe how much they have all grown!  Such a shame we didn’t manage to get the full team of seven little men together!  Maybe next time.

In other news, Alex met a new babysitter on Friday night as our former one has just moved back to Australia (we miss you Jess!) – which meant Matt and I went on a date night.  We tried out a local pub/restaurant called The Crooked Well in Camberwell – any fellow South Londoners reading this must try it.  We had a scrummy meal and a really relaxing evening out!

But this biggest excitement of recent weeks was waking up this morning to a pretty impressive snowfall!  Alex didn’t really know what to make of it – and looked genuinely confused looking outside this morning.  We dressed him up in wellies and a snowsuit my parents bought him about a year ago (which thankfully just fits him today!) and marched him over to Sunray Gardens across the road.  He was pretty tentative about walking in the snow – we don’t think he likes his wellies – but he seemed to enjoy it and just about managed to throw a snowball.

Here’s a slideshow of snaps from today – love his red nose!

One thought on “Winter at last”