We made it home from the Borders just in time for Matt to have a couple of crazy weekends volunteering for two of the London 2012 Olympic test events.  He spent an incredible amount of time over the weekend of 6/7 August in Hyde Park helping with the triathlon, and spent much of the following weekend in training or standing on a traffic island in Richmond Park waiting for the road race to speed past!

This meant that I had quite a lot of time to fill with Alex on my own!  Thankfully he was in pretty good form, the weather was good and I had some visitors for part of the time – so that made things easier!  The first weekend we were back, Alex and I braved a trip up to Regents Park on our own to go to the Lollibop Festival – an event entirely focused on little people!  It was pretty pricey to get in (luckily Alex was free!) – but it was worth it.  Alex had a blast playing in the softplay and tinyplay tents – and when I could drag him away we did a Gymboree class. We even got to see Cerrie from CBeebies, and danced to ZingZillas and Rastamouse performances.  Hilarious stuff – and a great way to pass a day together.  Here he is playing with some WOW toys – I literally had to drag him away from this table: 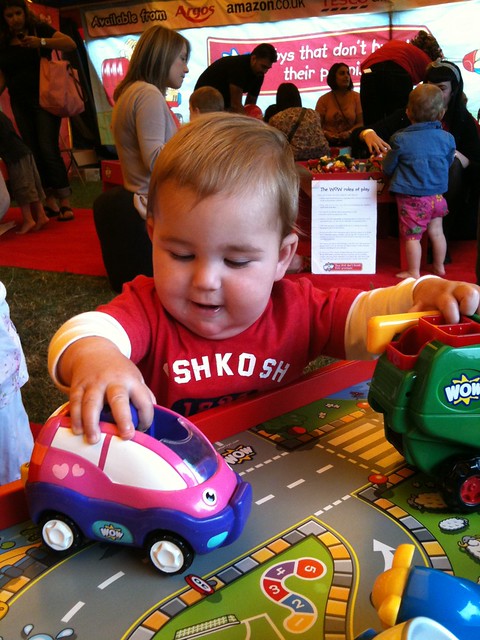 The next day we stayed local and went out for breakfast together at the Brockwell Park Lido Cafe which was scrummy.  We also went to play with Phoebe and Henry (children of our good friends Charlie & Catherine!).

The following week, we had a final visit from my parents who were about to head back to Michigan.  We enjoyed a pub lunch at The Florence and plenty of time pushing Alex around the park on his trike.  When my parents were visiting, Alex discovered a joy for plane spotting!  We’re under the Heathrow and City Airport flight paths, and Alex now delights in scouring the skies or listening carefully for any hint of a plane – he then points and shouts at it, before waving as the plane passes overhead.  This new hobby is passing the time most days now – what a geek!  Here he is cuddling Grandma before she flies home (not sure if he spotted her plane…) 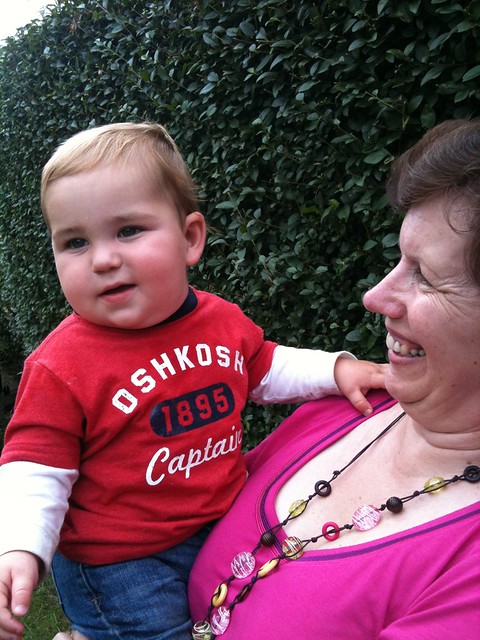 We had visitors last weekend, with Katharine joining us for a key event – a trip to see In the Night Garden Live in Richmond!  Watching In the Night Garden is a regular part of Alex’s bedtime routine – and I think it blew his mind seeing the life size characters :-). The performance was incredibly well done and the set up was perfect for tiny children – Alex could crawl around wherever he wanted and there was so much going on, he didn’t get bored.  And if that wasn’t exciting enough for him – Richmond is so close to Heathrow that the plane spotting was incredible 😉  Here he is looking skywards: 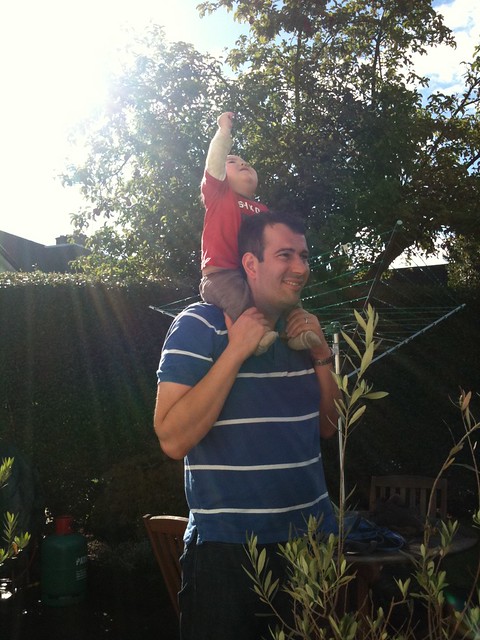 Our childminder is on holiday at the moment, so we had our babysitter Jess looking after Alex this week while we’ve been working.  She did a fabulous job entertaining him for the week even though he was a bit under the weather. For nearly 10 days, he went completely off his food (which is unusual for Alex!) – poor Jess spent her week trying to persuade him to eat some toast or pasta.  He’s refusing to be spoonfed – he seems to think he’s grownup enough to feed himself!  Thankfully, he suddenly remembed he was hungry on Friday and is back to eating massive portions of food and making a huge mess.  Here he is looking proud after feeding himself dinner:

The hunger strike seems to have made no difference to his growth – we took him to get weighed today and he’s still on the 98th centile, weighing in at nearly 12kg.

Back to what we’re up to, with Jess, Alex went to a new music class and even did some painting – I now have Alex’s footprints in paint which is so cute!  And Alex has finally discovered our piano – here he is looking quite serious about his new toy: 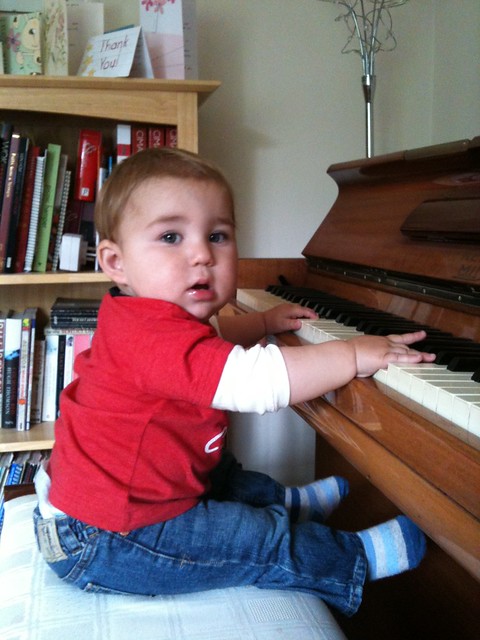 Matt and I are on leave this week, so we’re off on a short break to Somerset on Wednesday – more on that next week.  I think a trip to Longleat is in order! And I’m sure we’ll find another softplay to visit…