Well, we’re back in London after our first family holiday.  It was mostly a success, although we snuck back home a little bit early (more on that later…)

We booked a week in The Cowshed – a stunning barn conversion in a pretty village in rural Dorset.  It was a fabulous place to take children and I’d highly recommend it – everything you could possibly need was provided, including a cot, pushchair, feeding stuff, toys, bathing equipment and more.  And the village was gorgeous – thatched cottages everywhere and surrounded by fields, woods and footpaths.  Heaven.

We packed plenty into our five day trip.  After visiting an old school friend of mine in Bournemouth, we took Alex to see the sea for the very first time! He seemed intrigued by the waves, although it was a little too chilly for him to have a dip! 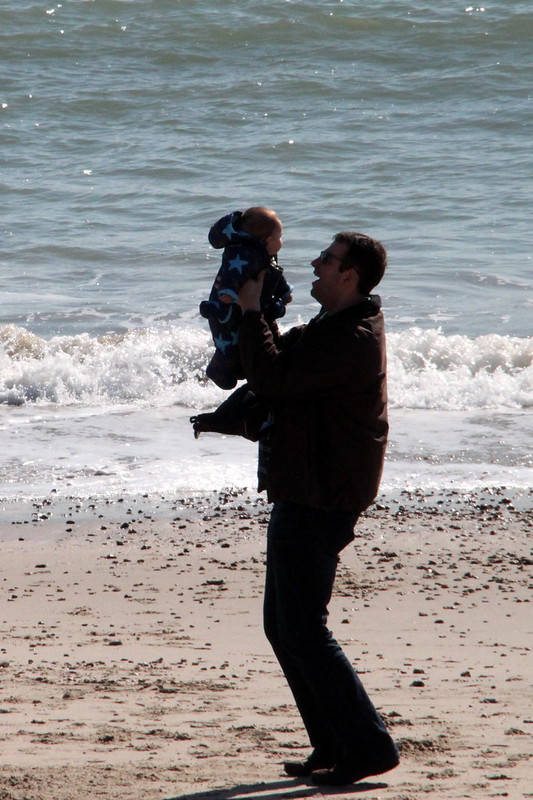 He was slightly less inspired by Stonehenge: 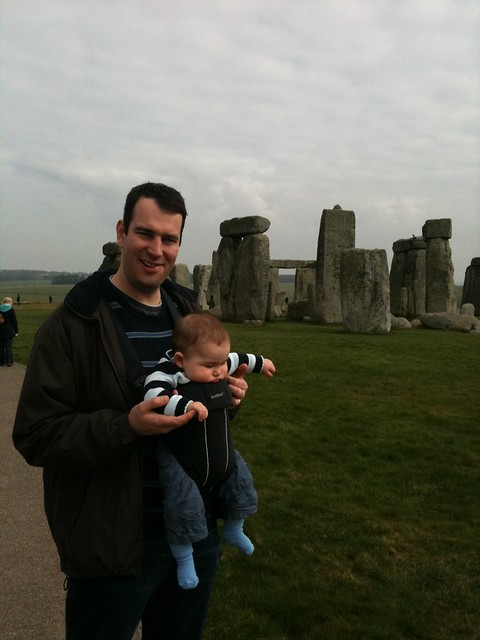 But was more intereted than we expected in Salisbury Cathedral (although he pretty much ignored the Magna Carta and concentrated more on the local cat who’d taken up residence in the chapel where it is housed!) 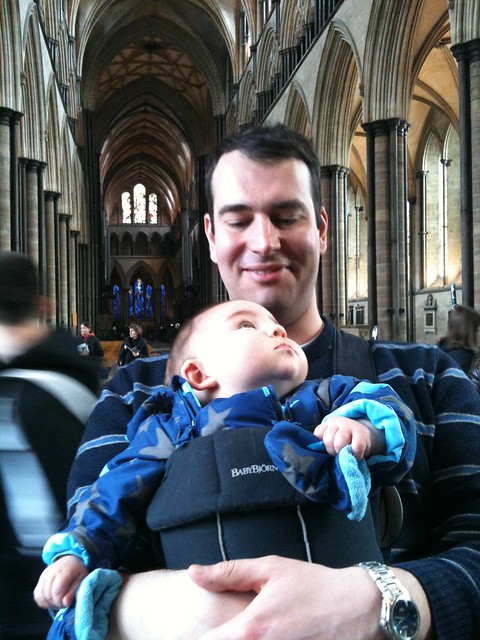 We visited a couple of farm parks where Alex stroked a goat and tried out our new baby backpack to go on a lovely hike to a country pub for lunch: 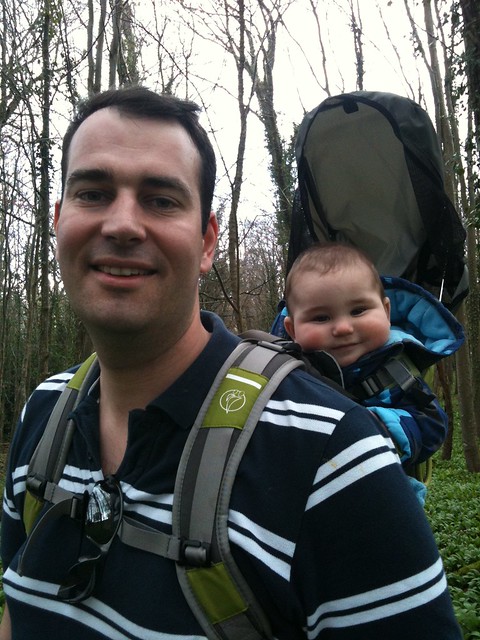 And Matt and I had a bonus treat – our very first night out together for over 6 months!  A lovely local lady babysat Alex (who behaved perfectly and stayed asleep all evening) whilst we visited the stunning Museum Inn for a delicious meal.  We even managed not to talk about Alex for the entire time!

But despite all that fab stuff, there were a couple of disappointing aspects to the week!  First big disappointment was my discovery on Sunday evening that Longleat Safari Park was closed during the week throughout March – so I missed the chance to show Alex the animals (and to stalk Ben Fogle!).

The second, most amusing disappointment, was the “Woodland pram walk” we signed up to.  One of the local nature reserves promoted an “active families” hour long walk in the woods for buggies, so we eagerly turned up with Alex in his pushchair to be guided through the beautiful Dorset woodland.  The organisers seemed a bit shocked to have a father in their midst as 15 mums and babies got ready for the weekly stroll.  We were a bit shocked to find that we didn’t actually go into any woodland and spent an hour walking around the local housing estates – apparently one of the babies in the group was a “bit floppy” and they didn’t want to go far from a major road in case there were problems.  All very bizarre and not quite what we had in mind!

The final, much bigger disappointment, was that Alex decided that he didn’t really like sleeping in Dorset.  We’re still not sure what the problem was – he’s still teething and has a bit of a cold, and perhaps he wasn’t a fan of the travel cot and the new room – but by the fifth night he was waking every hour or two super upset and taking ages to settle back to sleep.  We were getting so tired, and getting so desperate to get him to sleep that we were breaking all the good sleep habits we’d taken months to establish, that we decided to head back home and enjoy the rest of Matt’s leave in London.

And I’m glad we did as Alex slept through the night for the first time last night – so looks like we didn’t break too many habits in the end!!  And we’ve still got four more days till Matt’s back at work 🙂

And for me, one week left of maternity leave to go.  More from Family Agar soon…

p.s. Completely unrelated comment, but something just made me chuckle.  The day my maternity leave started in August 2010, Season 5 of Grey’s Anatomy was released on DVD much to my excitement (I know, it’s a bit of a guilty pleasure!).  It is now March 2011 and I’m about to return to work – and I have just taken the shrink wrap off the DVD case to watch episode one.  That’s a very clear demonstration of how wrong my expectation was of what maternity leave would be like!