It’s weeks and weeks since I’ve blogged. I confess after spending long days, evenings and weekends in front of my laptop trying to work through lockdown, I’ve not really fancied dedicating my limited free time to more screentime! But I also don’t want to forget this (hopefully) unique time in our lives – so here is a largely photographic snapshot of what we’ve been up to since the Easter break.

With Alex and Sophie not in the school years invited back to the classroom, we’ve had to continue with the relentless juggle of work and home school. Occasionally home school looks like this, with contented, hard-working children:

Pretty frequently though it looks like this, with frazzled parents and hysterical children. One thing is clear – neither Matt or I have any desire to become teachers! 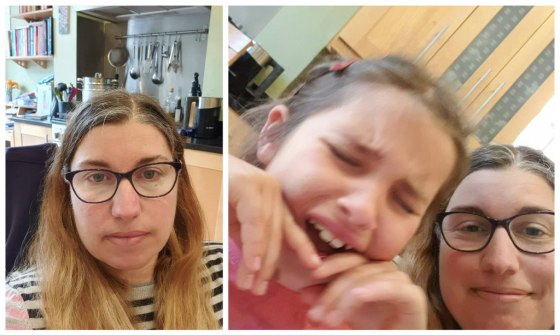 With more frequency than I am perhaps prepared to admit, ‘home school’ actually looks like this: 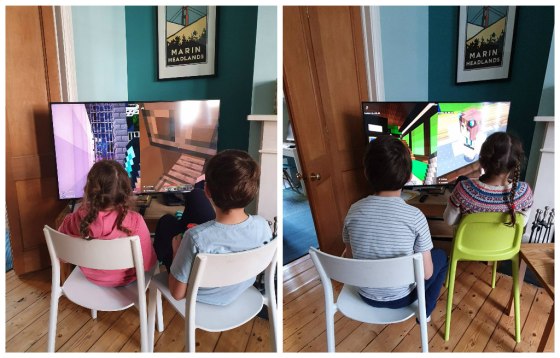 Thankfully, while our School has been excellent preparing online lessons and worksheets, the load hasn’t been too extreme and so we’ve only had to do a couple of hours a day max. Leaving plenty of time for other local fun. I think we’ve explored every inch of our local parks, and were delighted when more of the local cafes opened up allowing us opportunities for ice cream pit stops!

We survived the recent heatwave in our garden, with a lot of paddling pool time:

Even Matt joined in after a long bike ride! 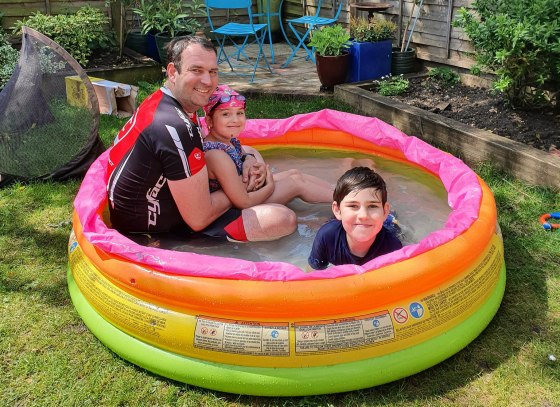 The children pooled their pocket money savings to buy a brilliant remote controlled car which entertained them for a week before it broke (must remember to get back to the supplier to get that fixed….) 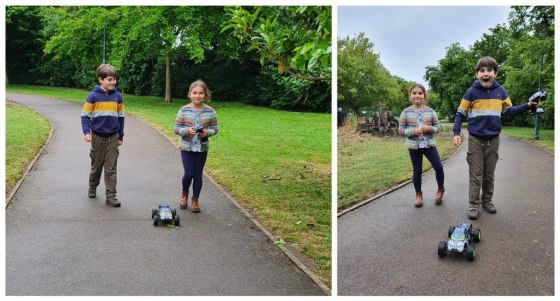 Sophie got stuck into some cornflour science experiments and whiled away a surprising amount of time playing with the mixture.

Last weekend, the children got our tiny tent out and camped in the garden by themselves for a couple of nights. Here’s Sophie having set it up with her friend Una:

Without a car, we’ve been relying on our bikes for everything. Matt’s now doing weekly long cycles out to Kent which he’s loving, and he’s been taking Alex on some adventures around the city. A frequent ride has been up to Crystal Palace, involving some serious climbing. Here are Alex and Sophie the first time they each conquered the hills to get there. I did it for the first time yesterday and it is so steep for so long I am amazed the kids can climb it without walking! They were both so proud the first time they made it!

Crystal Palace Park has been a pleasure to explore – with Alex making regular visits to the Victorian dinosaur sculptures: 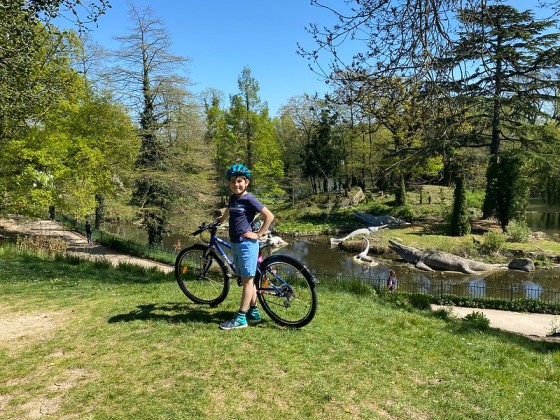 And the brilliant skateboarding park (which is also fab for scooters!)

Alex and his friend Sam have explored further afield with Matt – including the centre of town where they’ve enjoyed much quieter roads to see Buckingham Palace, Parliament, the City and St Paul’s Cathedral:

They’ve also cycled over to Battersea Park, Greenwich and even as far as the Thames Barrier!

Two weeks ago, our school were able to take Year 2 back for a few days a week until the end of the Summer term, so Sophie has finally returned to class – for three weeks at least!  She’s absolutely loved being back with her teacher and friends. Poor Alex has been left to hang out with Matt and me on his own. In between home school and computer games, we’ve tried to get out and about. Here we are on a cycle around Brockwell Park: 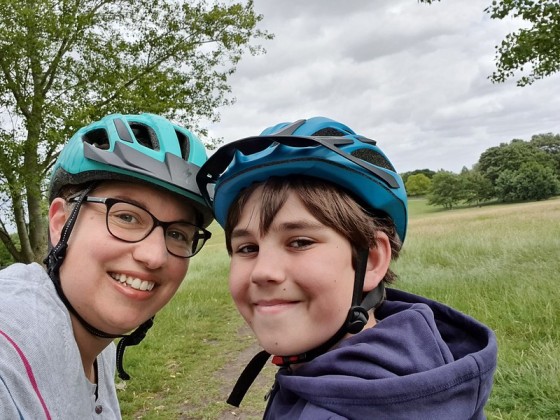 He’s spent lots of time at the Brockwell BMX track:

We’ve been caught out by rainstorms:

And explored the beautiful Dulwich Woods:

Alex has managed to keep up with his guitar lessons via Zoom, and it was exciting to finally be able to restart them in person – albeit socially distanced in the garden! 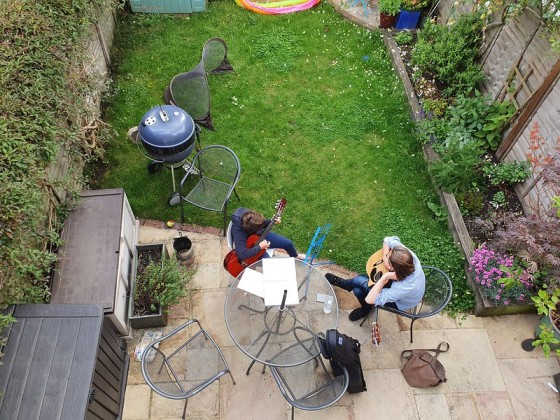 He performed some Coldplay for a Cubs online meeting recently (not a Coldplay fan myself, but I don’t mind when Alex is singing!)

Sophie used some of her savings to buy a tutu dress and has been trying out YouTube ballet classes a bit:

Probably the highlight of lockdown, for Alex and Sophie at least, was the opportunity to borrow a neighbour’s dog for a day. Here is the utterly gorgeous Archie – a 2 year old cavapoo (more like a teddy bear!).

The poor dog was walked so many times, but he took it in his stride and seemed to enjoy the constant attention.

We’ve continued our love of cooking and baking (much to the distress of my waistline!) – we’ve branched out into savoury a bit more, with homemade quiche, pasties, tortilla and, of course, more bread.

We’ve baked so many cakes and sweet treats, I’ve stopped taking photographs – but we did make an attempt at a Union Jack cake on VE Day back in May!

Best of all, the children are starting to cook more independently – and prepared a date night for Matt and I. They cooked everything – delicious lamb kofte and a double pudding of strawberry cheesecake and chocolate brownies! They even set up a restaurant concierge desk for us to book our table, and shared details of our fellow diners (can you read the list below? Hilarious!) 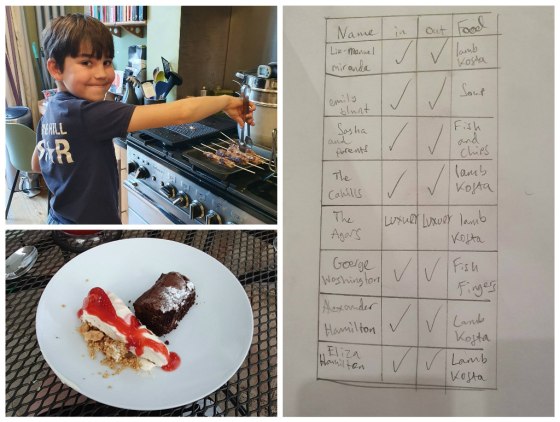 As you can see from the guest list, the kids are obsessed with Hamilton and Lin Manuel Miranda – and so the release of Hamilton on Disney+ was a particularly exciting occasion. Here they are in their PJs watching the opening songs as soon as it was released! 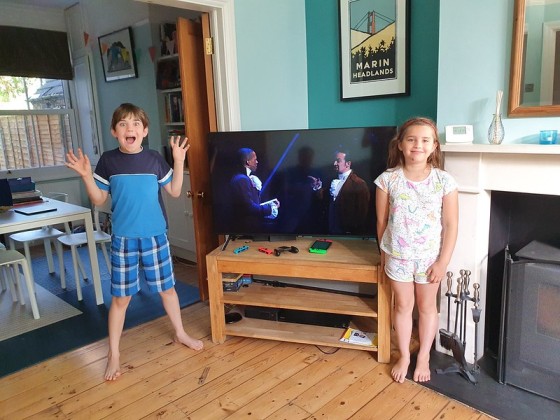 I still can’t believe we’ve been in this lockdown life since March – and save one day where I popped into my office – I’ve been home every single day with the kids. It’s been exhausting, stressful, relentless but also fun. We’re well used to working from home now, and I suspect work will never quite be the same again as my entire department enjoys a more flexible life and a lot less commuting.

I feel like, for us, the end is in sight (at least until we end up with a second wave lockdown…). We’re already getting some help. Sophie being back at school makes things more manageable and we also have a fab local Arts student helping out with Alex for a few hours a week so he gets some focused creative time without us having to keep taking calls and responding to emails.

My parents came down for the weekend last week which was great fun, and in a couple of weeks we’re heading down to a cottage in Sussex for a week. The thought of getting out of London makes me feel so excited.

I know we are very lucky – and are (mostly) still smiling

To close – just so I don’t forget – one of the few things I’ve done during lockdown that wasn’t work or childcare related was a virtual choir project. No longer able to meet every week, my choir has instead come together online to record a lovely piece of James Taylor individually from our homes. It was a fascinating, if a little excruciating experience setting up a home recording set up and recording my part alone. And it was certainly a challenge finding a blank wall to record the video against (as well as a rather precarious stack of furniture to balance my laptop on to get the right height!). But I think it sounds fabulous and it was super fun to be part of a music project. Hope you enjoy!