You made it to the final blog post of our European roadtrip!  After our adventures in Annecy, we had been planning to spend our final couple of nights in the vineyards of Burgandy and Champagne, but we changed our mind at the last minute and decided to take the children to Paris. We booked ourselves a lovely Airbnb on the outskirts of the city where we could leave the car.  From there it was just a short hop in an uber to the local RER station which had plenty of fast trains into the city centre.

It’s years since Matt and I have visited Paris and we were so excited about showing the children some of our favourite haunts there.  In hindsight, we probably should’ve considered that our favourite urban things were perhaps not that interesting to two kids who’d just spent the past fortnight roaming free in the big outdoors!  So, they were less than impressed at our first stop – the stunning Notre-Dame cathedral.  Look at Alex’s face in this picture!

We managed to wander round on the inside and Alex and Sophie were quite impressed with the size of it and the intricacy of the beautiful windows.  But their favourite thing was the amazing stone work on the exterior – they loved spotted the funny faces and gargoyles. 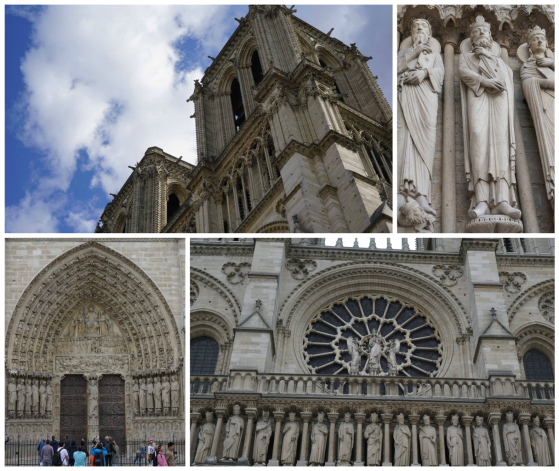 Much more fun was the little playground next door and the opportunity for piggy back rides!

Things looked up when we wandered over to Île Saint-Louis on the hunt for breakfast! Whenever Matt and I visit Paris, we always visit the tiny patisseries on the island, and Alex and Sophie were more than happy to take part in that tradition.

Full of delicious treats, we headed to our next stop of the day – the Eiffel Tower.  We travelled by bus and thoroughly enjoyed the scenic journey across the city.  We passed so many famous sights like the Louvre, Hotel de Ville and Les Invalides. Alex was most excited to spot a statue of Thomas Jefferson – he’s obsessed with the musical soundtrack to ‘Hamilton’ and so has an unusual knowledge of key 18th century figures!

I rather stupidly failed to booked tickets to the Eiffel Tower with enough notice, so there were no tickets left to go to the top, so we had to make do with the second level access.  But I needn’t have worried, the views in every direction were still absolutely stunning and the kids still excited to be up that high. 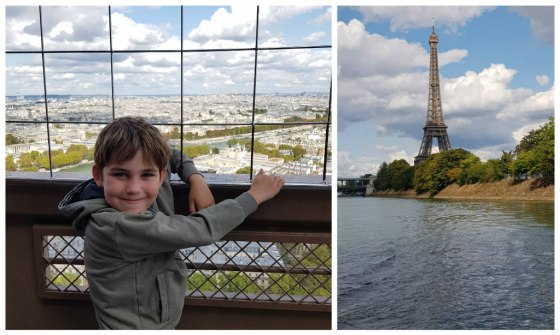 We walked back down, enjoying seeing the intricate structure up close.  Sophie was determined to count every step, so it took us a while!

Back at ground level, we chose to go on a Seine river cruise from the tower to see more of the city.  Again, cooping the kids up for an hour probably wasn’t the smartest choice but it was fun seeing the city from a different angle and Sophie and Matt had some fun with the camera at the back of the boat for a while!

Our final excursion of the day was much more successful as we let the kids lead the way.  We took the metro over to Montmartre for a wander.  We found the wall of love and tried to spot all the languages we recognised.

Then the children led the way up the steps and cobblestone streets, stopping to admire the yummy creperies we passed and the touristy artists around the Place du Tertre.

We enjoyed some live jazz before settling down for a delicious meal together in a pavement cafe – super touristy, but just perfect for us. We let the children choose an enormous, chocolate crepe for pudding before we started the journey back to our accommodation.  Amid all the tacky attractions, we loved getting views of the gorgeous Sacré-Cœur as the sun set.

The children loved the little funicular that took us back down the hill to the metro.

We’d walked miles, so we were relieved to get back to our apartment – and to sleep in beds and not sleeping bags for the night!

The next morning – the final day of our holiday – we decided not to take the children back into the city and instead opted to visit the gardens of the Palace of Versailles.

We gave the children a map with a recommended route on it, and let them direct us around the enormous garden. Matt quickly had them posing alongside the statues the decorated the route!

It turned out that there were fountain shows every hour, so all the way around the garden, the fountains were set to display alongside musical accompaniment – it was quite spectacular!

I loved how the dense, wood lined paths would suddenly open up into spectacular glades containing more fountains and water features.  My favourite was the ballroom glade where cascades of water surrounded an open space where Louis XIV held a banquet to celebrate his coronation! 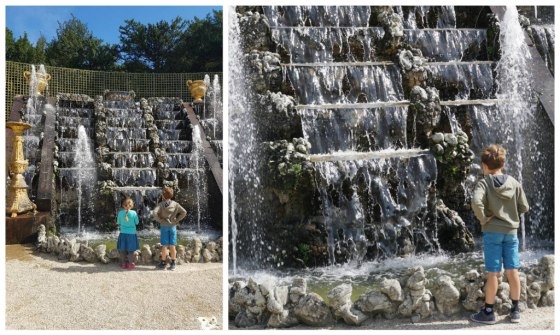 We posed for photos at one of the reflecting pools…

…before hiring boats for a paddle on the Grand Canal.

Eventually, we wandered back to the car and set off on the final drive of the trip – back to Calais!  But we had one final stop to make.  After reading War Horse, Alex has been really interested in the First World War, so we made a detour to visit the Canadian War Memorial at Vimy Ridge where there are restored trenches.  It was sobering seeing the impact the war had on the landscape a century later as the ground was churned up by shells and mortars. 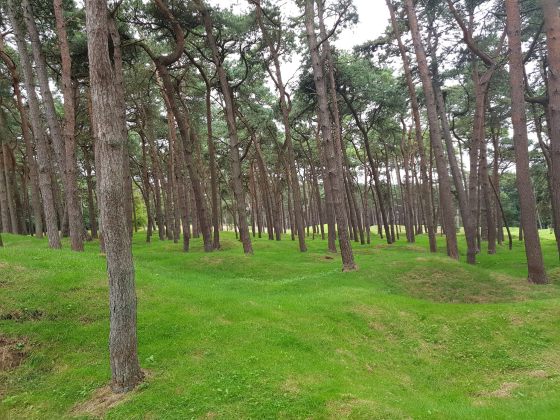 We had a quiet walk through the trenches together and talked about what had happened there.  I think Alex will remember it for a long time.

That evening we arrived in Calais where we spent our final night in a surprisingly good Holiday Inn complete with a swimming pool and yummy restaurant before heading back to the Eurotunnel early the next morning.  We were back in London in time for lunch with a car full of laundry!

It really was a fabulous holiday – it’s hard to believe it was only two weeks long, we experienced so many places and activities together and the fact we were camping most of the time meant we really did unplug properly and slow down.  I am surprised to find myself a convert to holidays under canvas and think we’ll be exploring more of Europe like this in future years!

Leave a Reply to Kids of the Wild Cancel reply 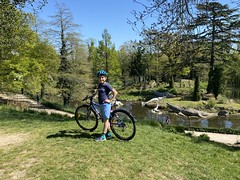 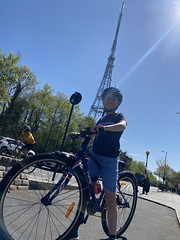