While we headed to Edinburgh in August to enjoy the Fringe, we spent very little time in the city – instead enjoying time to explore outside.  We started at Beecraigs Country Park in Linlithgow with a family walk in the woods.   We were there quite early and found walking through the forest so peaceful.  Alex was treated to much tree climbing fun which kept him occupied so we could enjoy the silence!

Deep in the woods is an amazing adventure playground, so the children recovered from being cooped up in the car the day before by running wild for a couple of hours.  Alex climbed up to the very top of the enormous spider web climbing frame – he was so proud!

After a picnic lunch, we walked to Beecraigs loch for some stone throwing and some unanticipated paddling as Alex accidentally kicked his croc into the water – thank goodness they float!

Then we wandered back through the forest back to the car, making the most of the wide paths for a spot of scooting!

We dropped into Linlithgow Palace afterwards – a very popular spot for my family and somewhere I visited on childhood holidays throughout my childhood.  Alex immediately made friends with a little boy and spent the next 30 minutes playing football with him while Sophie and I headed down to the loch.

We were surprised and impressed with Alex’s football skill – he’s never shown much interest or aptitude, but he held his own pretty well!

Meanwhile, Sophie and I chased each other up the slopes to the loch!

We did spend two days of our holiday in central Edinburgh enjoying several Fringe shows. I love these pics of my pair making the most of city transport on the way to the shows – it was great not to have to drive!

We saw a real variety of shows, including puppetry fairy tales, a bubble show and a wonderful performance of Saint-Saëns Carnival of the Animals where the children took part and pretended to be some of the animals.  Here they are on stage!

Our favourite show of all was called Trash Test Dummies involving music making and acrobatics with dustbins and rubbish – the children thought it was hysterical (as did we), and sat captivated for nearly an hour.  It was such a pleasure being at the Fringe with the children – we’ve done it once before, and while we enjoyed it, they found the crowds a bit overwhelming and we were limited by Sophie being small and needing to nap.  This time, they loved the bustle and activity of the Royal Mile, amused by all the street performers and music.  We’ll definitely be back.

One thought on “Castles, country parks and culture – {Edinburgh 2015 part one}” 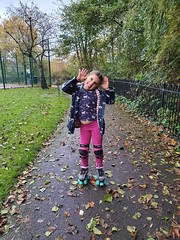