Just realised I haven’t blogged about the last couple of weeks.  It’s been a fortnight of contrasts, with some frustrating illnesses for Alex and Sophie and some surreal experiences for me.

Last weekend started off with me heading back to Wokingham in Berkshire for a day at my old secondary school.  Our two wonderful music teachers are both retiring this summer and so had organised a final school concert – to which they invited their old pupils to joined in.  So, feeling very apprehensive about returning after 18 years, I joined a couple of very old friends for a thoroughly wonderful day.  Once I’d recovered from the realisation that (a) every single current pupil in the school was born after I left, (b) I was the oldest “old girl” present at the reunion and (c) the headteacher (formerly my sport teacher) chatter to me like a colleague and not a pupil, I had a complete blast!

It was a really moving occasion – and given the enormous impact Mrs Scotchmer and Mrs Pearce made on my life – am so very glad I went.  Here are a few snaps of the day – including some of my fellow old girls nearly two decades on from leaving!

Meanwhile in London, Matt was having a busy day with Alex and Sophie. He took them on an adventure to Greenwhich where they saw the Cutty Sark and explored the brilliant Greenwich Park children’s playground and had a picnic. They then took the Emirates Airline cable car over the river, and took the driverless DLC home. Very ambitious, but they clearly had a brilliant time.

It was all too much excitement for Sophie, and poor Matt had to cope with a poorly toddler at bedtime. Lots of laundry later, and after a thankfully really good sleep, she seemed to be much better on Sunday.

But to be safe, we stayed close to home, spending the morning in Brockwell Park with my parents who were visiting for a couple of days. 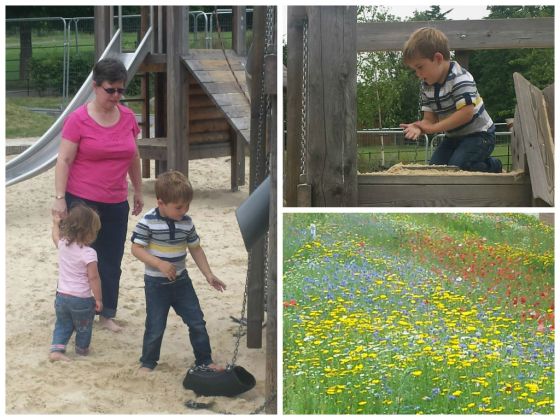 While Sophie was napping, we managed to squeeze in a spot of Tour de France viewing on TV – the only way we could manage it with Alex was to plug him into the iPad with some snacks. Not my finest parenting hour, but a very peaceful 30 minute break in front of the cycling in Yorkshire! Alex was even interested enough to watch a few minutes before complaining it was boring – I love that he watched it through his binoculars!

We then all headed down to Sunray Gardens for an evening play in the sunshine, although it was tricky to get Sophie there as she insisted on walking and befriending every cat she passed: 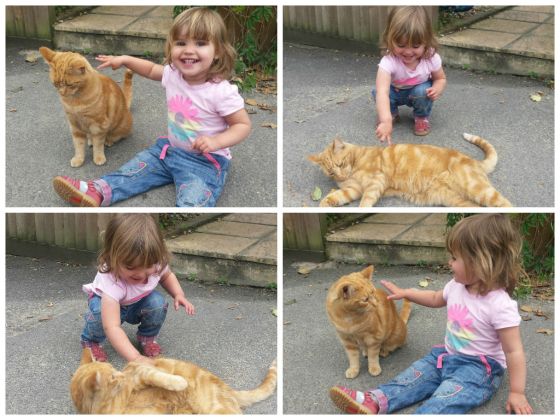 But we did eventually make it. Sophie had fun with Grandpa: 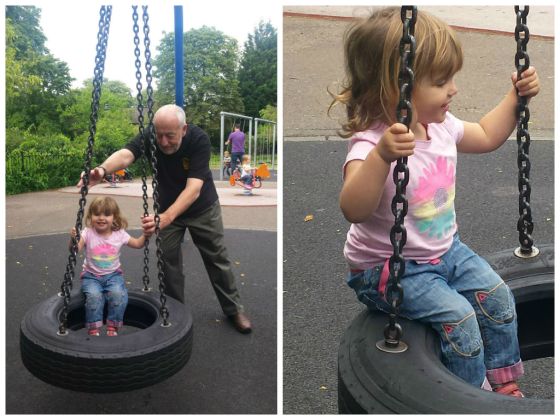 And Alex rode a pedal bike on his own for the very first time! He suddenly clicked with his balance bike last week and is cycling everywhere – but within 2 days of figuring that out started begging for some pedals. So we brought an old bike some very kind neighbours gave us for the kids, and let him have a go. To our surprise (and pride!), he picked it up ridiculously quickly. Frustratingly, every time I tried to film him, he struggled, but this is the best clip I got (which I will keep just in case he wins the Tour de France someday). Will try and get a better clip this weekend.

With both the kids on great form on Sunday, we thought all illness was passed – but sadly we had to collect Alex early from Jacqui’s on Tuesday. He had a temperature and was really sleepy and achy, so he slept all afternoon and all night. And then, to make things worse, Sophie was sick again at bedtime! So, Matt and I had to divvy up childcare duty on Wednesday while we had them at home getting better! Thankfully, a quiet morning under duvets saw them start to feel better, and by the afternoon they were eating ice cream in the garden.

They were thankfully back at their childminder on Thursday, which meant I could get up to Manchester with some of my team at work for a major awards ceremony for Higher Ed comms and marketing. Turned out to be totally worth the trip, as we came away with the Gold Medal for Best Postgraduate Prospectus. Such fun to go out to a black tie do in a posh frock – just regretting not getting a pic of me all dolled up since it pretty much never happens! But here we are with our prize 🙂

And, since this blog isn’t really about me, here’s one last snap of the kids having a very splashy time in the bath tonight.