I’ve just been watching “One Born Every Minute” which always makes me think about my own birth experience (not something I particularly enjoy recalling) – so instead of dwelling on that, I thought I’d do a quick blog about the past week or so as we’ve had a lovely family start to January!

And it’s been mostly about  birthday celebrations which has certainly been fun.  Last week, Alex was invited to his first two proper birthday parties.  So I spent an exhausting couple of hours last Wednesday at the third birthday party of one of his friends from his childminder’s – Amelia.  The children had loads of fun at a brilliant soft play in Beckenham – although Alex wasn’t impressed at having to stay in the toddler corner, much preferring to attempt to follow his older friends into the main area.  He really doesn’t accept he isn’t three!  Biggest challenge for me at the party was to stop Alex eating the entire birthday cake – he turns out to be a massive cake fan (well, who isn’t?!) and doesn’t like to be restricted to just one piece!

The following day, it was my birthday – a much quieter affair thankfully!  I had a lovely day though, with Alex accompanying me to lunch with a friend in town.  This involved a train ride – which seems to be Alex’s favourite thing.  He spent the entire 10 minute journey shouting “CHOO CHOO” very loudly – felt quite sorry for all the other passengers after the first few excited yells!  Here he is literally glued to the window: 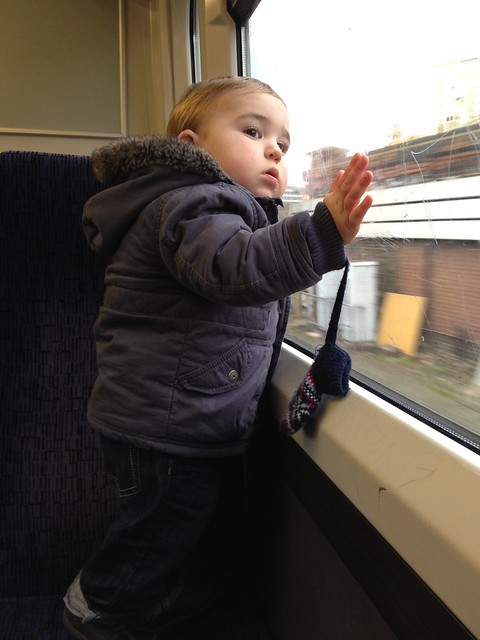 Alex was very well behaved in the restaurant, even managing to attempt a little bit of colouring in (when not trying to eat the crayons – his teeth went green!): 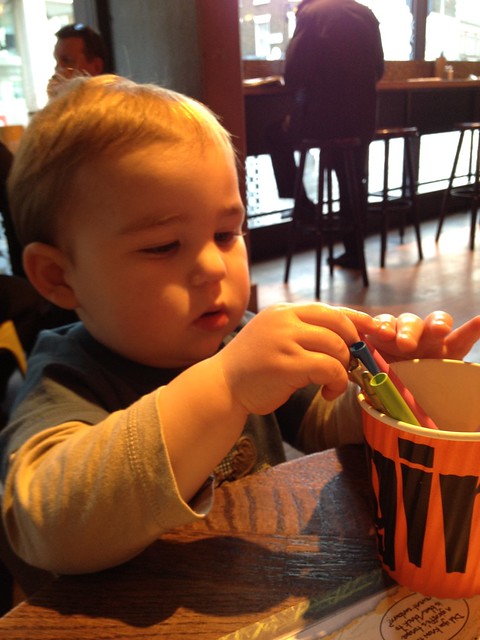 On my birthday afternoon, some friends and their children came round for more cake and a playdate.  And then Matt and I enjoyed a celebratory steak for dinner.  Lovely day all round!

It was back to work for me on Friday – a nice one day week.  Alex seemed happy to be back with his childminder after a break of two weeks – although I wasn’t sure what to think when she sent me this snap of him during the day!  Some sort of punishment technique?! 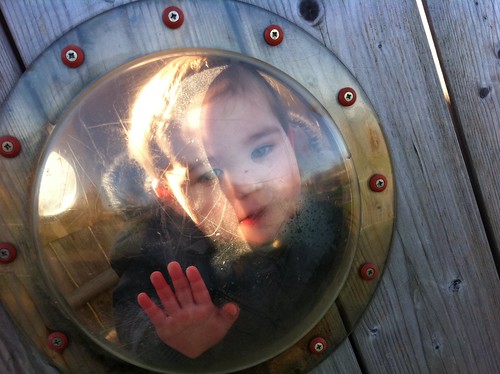 We had a good weekend, despite two completely failed attempts to take Alex swimming.  It seems that Crystal Palace is a pretty popular place for family swimming at the weekend – and it was full both times we tried to go.  Such a shame as Alex enjoys it so much.

On Saturday, my brother and sister-in-law came up for the night – which meant even more fabulous Christmas presents for Alex!  They’d not seen him for a while, so it was fun for him to hang out with his auntie and uncle on Sunday morning.

Sunday saw the final birthday celebration of early January – another third birthday party, this time for Alex’s cousin, Edward.  We spent a brilliant hour at “Specky’s pirate ship softplay” in Guildford – a fabulous place for kids – followed by a hilarious meal at Pizza Express. I felt a little bit sorry for the other diners when we turned up with a large number of small children – but everyone was very well behaved, and true to form, Alex consumed a vast amount of salad, dough balls, pasta, ice cream and cake.  No wonder he was wide awake and chatting most of the journey back to London when he should have been sleeping! 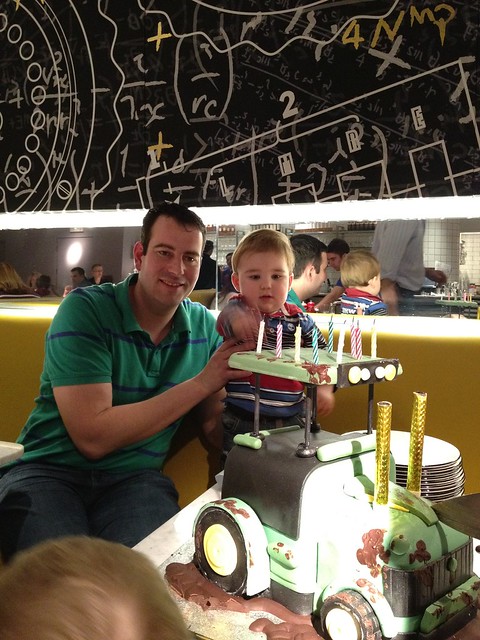 And a silly snap of Alex with static hair: 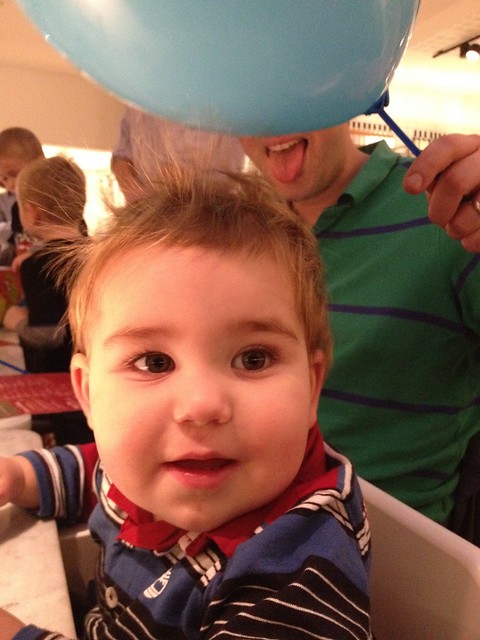 To close, here’s a video from a couple of weeks ago which never fails to make Matt and I laugh.  It’s Alex filming himself – and the squeak you hear at the end is Alex picking up a big toy car and attempting to smash it into the phone.  The last thing you see is my hand stopping this!  I love his noises!

One thought on “Birthdays galore”