We kept heading south for our final road trip destination of 2019. Longing for some mountain air, we ventured into the foothills of the Pyrenees to stay in a completely different campsite to the rest of our trip.  The Sunelia Les Trois Vallees was a huge campsite with rows of tent pitches, caravans and loads of cabins and chalets – it was the kind of place I’m not normally a fan of.

But…. the facilities were absolutely incredible and we loved it!  There was an enormous swimming complex with slides, lazy river and deep swimming pools.  There were fabulous playgrounds, loads of safe lanes for the kids to cycle on their own, a great bar and restaurant, and shower facilities that rivalled a posh hotel (first time I’ve felt a need to photograph a campsite shower cubicle)!

The children adored it – and they spent many hours making the very most of the swimming pool complex, while I enjoyed soaking up the beautiful views with my book!

We did venture away from the site each day though to get into the mountains.  On our first day, we headed up the Hautacam – a mountain I’ve seen often in Le Tour de France (and one that Matt climbed when he did a stage of Le Tour years ago). The drive up it was crazy – so many cyclists were attempting the many switch backs!

When we managed to pass the celebrating cyclists who’d actually reached the top, we found stunning views of the Pyrenees in all directions and a summer playground. The children immediately got in the queue for the luge and loved speeding down the course!

I’d found a walking route from Hautacam to Lake Isaby, so we soon set off up to the ridge line to find the path.  As we climbed we met one of the locals – a very grand looking mountain goat.

The kids absolutely loved getting up close – but then we had a bit of a stressful (and also hilarious) five minutes where the ram seemed to decide that Matt was a bit of a rival! So it followed us as we tried to walk, and kept trying to ram him. We weren’t entirely sure we were going to be able to proceed with the hike, but thankfully it decided Matt wasn’t actually a threat and gave up!!

We opted to follow a quieter path than most take to the Lake and quickly found ourself alone on the mountain.  It was absolutely stunning with pink heathers dotted over the lush green hillside and peaks visible as far as we could see.

It was incredibly hot with no shade, so we were grateful when the path started dipping down towards the tree line where we hoped we’d find some respite.

And we did – in the form of a little mountain stream where we sat with our feet in the water as we ate a picnic lunch.

Alex and Sophie had so much fun splashing around!

We didn’t really want to leave!

Before we set off in search of the lake, we attempted a family photo – but it was a bit too bright!!

Back on the path we started climbing again as we neared the lake.

It was worth the hot trek – the lake was really pretty and a lovely spot for a rest.

Alex and Sophie tried hard to spot signs of life in the mountain water but I don’t think they saw anything!

We took an easier route back to the car along a more well trodden path – and were quite confused to find a bath in the middle of nowhere!  Perhaps a water trough for passing goats and sheep?

As we neared the Hautacam complex, we started down a gentle grassy slope only to be overtaken by a shepherd and his huge flock of sheep!  We soon found ourselves surrounded which the children found hilarious!

Our Pyrenean walk was a real holiday highlight for me – and we’re already talking about when we can go back to explore of the mountains on foot.

The next day, we swapped travelling by foot to pedal power. Our campsite was right next to the greenway cycle route between the mountains and Lourdes. So Matt and I hired bikes (the only ones available were electric!) and we hit the trail.

It was a great family ride – running along the valley it was largely flat with smooth surfaces and stunning views along the way. Every kilometre or so there were information panels about the surrounding areas and local villages.  On our electric bikes it was an easy ride, but the children had to work a bit harder in the heat!

The path took us right into the centre of Lourdes where we stopped for a picnic before heading back 10km to the pool.

On the way back, Matt and Alex opted to do a spot of mountain biking in the woodlands that ran along the route, so Sophie and I rode together back to the campsite.

We loved the occasional evidence of the fact the path used to be an old railway line, with empty platforms and railway bridges dotting the route.

We found another form of transport the next day.  After the short pony ride the children tried in the Loire, Sophie was desperate to try more riding – so we were delighted to read about a stables in the Pyrenees where children could go on a proper hour long pony trek.

Alex and Sophie were thrilled to meet their ponies (who had the craziest names – Ru-du-du and -Tra-la-la!). We were less thrilled to discover that we had sole responsibility for them during the trek!  We were told to follow coloured signposts and how to guide the ponies – and then we were sent on our way.

The ponies were clearly used to the route and were mostly brilliant – although we did have a few comedy moments where they ground to a halt and we struggled to chivy them on. It was lovely to walk with them through the woodland and quiet lanes.

Matt and I were quite relieved to reach the stables again with both ponies – but Sophie in particular was sorry to bid farewell!

That afternoon we parted ways – with Matt and Alex trying out canyoning together. Here’s a very excited Alex getting ready to abseil, jump off rocks and swim under waterfalls! That was definitely Alex’s favourite holiday memory!

Meanwhile, Sophie and I were exploring the brilliant Pyrenean Animal Park near the campsite. I’d highly recommend a visit – it was a beautiful park, with big enclosures, really interesting animals and excellent hands on activities. My animal mad daughter couldn’t believe her luck when she was able to climb into a goat enclosure.  She insisted on saying hello to all of them, paying special attention to the babies!

But best of all was the marmot enclosure!  Sophie was able to give some marmots a snack of some vegetables – and she was very popular as a result!

After the zoo, we treated ourselves to a trip to Le Jardins des Bains – the local hot springs! We enjoyed an hour relaxing in the warm waters before meeting the boys for our last night.

Of course, after driving all the way to the Pyrenees, we had to get all the way back home!  So over two days, we gradually made our way to Calais, stopping near Amboise for a night in a hotel to break the journey. I can’t tell you how much I enjoyed an air conditioned hotel room with an ensuite after 15 nights under canvas!  I think you can imagine how much the kids enjoyed the pool!

We had a fabulous holiday. As someone who was never much of a camping fan, I confirm I am now a convert.  It’s an ideal holiday for children Alex and Sophie’s age – they loved having the freedom to roam around the various campsites and spend so much time outdoors playing. And for Matt and I, we properly unplugged from work because we had no choice!  There’s not much point taking a laptop on a camping holiday!  I read loads of books and got more sleep than I have in months.

I wonder where we’ll go next! 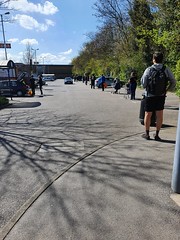 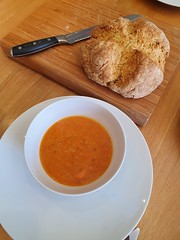