This week has been quite a watershed for Alex and I, as he spend his first days with his new childminder, Jacqui.  I was obviously pretty nervous having spent pretty much every minute with him for 6 months – but I needn’t have worried.  Jacqui has been fantastic and he’s had no problems settling at all.  He’s been out and about to various play groups, enjoyed the Spring sunshine in local parks, managed to successfully take all his milk from a bottle and eaten lots of new foods.  And the other children Jacqui looks after like to kiss and cuddle him, so he’s getting plenty of attention!  I think he’s going to love his days with her (probably more than with me!).

Phew!  To help keep my mind at rest, Jacqui has been emailing me photos of what he’s up to during the day.  They’re not the greatest photos as they’re from a mobile phone, but it was such a relief and a pleasure to get them!  Here are a few: 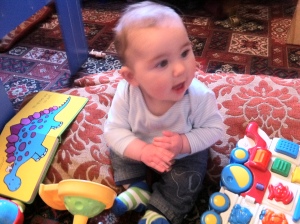 And here he is exploring a “baby sensory” zone at the playgroup he went to this morning: 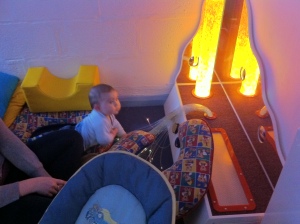 And finally, Alex completely exhasted from all the playing: 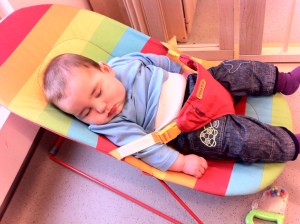 Knowing that he’s OK has meant I can relax and enjoy my sudden spare time.  I’ve read a book, enjoyed a long bubble bath, been out shopping, finally watched some DVDs and even popped into the office for some catch ups.  It’s been a good week.

Tomorrow we’re off on our first family hoiday – a week in Dorset in a little cottage. More soon.

One thought on “First days with his childminder”